OVER-RELIANCE ON ELECTRONIC COMMUNICATIONS: What It Can and Cannot Accomplish 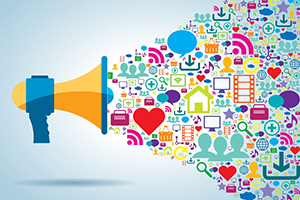 Over the last months, the COVID-19 pandemic has created an unprecedented increase in electronic communications with staff and stakeholders. That has in many ways been a lifesaver for nonprofits. Imagine how difficult it would be to stay in touch without Zoom or GoToMeetings.

I’ve written and talked a lot about the importance of having a well thought out plan as we gradually return to normal operations, whenever that might be. However, the danger is becoming even more comfortable and reliant on electronic formats for donor communications. That tendency is compounded by the staff reductions at many nonprofits.

Personal communication via Zoom is one thing; reliance on social media or broadcast emails is a different thing altogether. Failing to understand the purpose and effectiveness of each can cause the fund-development aspect of an institution to quickly go from bad to worse. That is evidenced with astounding clarity in the data below.

THE IMPERSONAL TOUCH
Nonprofits tend to measure donor communications in terms of the number of “touches per year.” A common theme in many of my previous blog posts is the importance of making those touches personal—meeting with donors, building relationships, and making in-person funding appeals. The more personal conversations you have with donors, the more money you tend to raise for your organization. See The Power of Personal Solicitation. One of the unfortunate trends among nonprofits is that those touches have become increasingly non-personal—organizational communications pushed out in the form of emails, blogs, social media posts, printed newsletters, and/or direct-mail appeals. These communications can be delivered to any number of donors with only a few key strokes, minimal expense, and a limited number of staff. As a result, donors are barraged with communications from nonprofits they support, as well as from organizations they never supported or even heard of.

Here’s an unsolicited comment from a close friend who wrote me about these trends in nonprofit communications.

One of the local charities my wife and I support sends me a pretty elaborate six-page newsletter every month. The organization was highly recommended by a fellow donor, and we’ve never doubted his advice or that the organization is providing a critical service to our community.

With this particular organization, we are what you (Eddie) refer to as “habitual givers.” Our monthly donations are set up as automatic drafts, and our commitment does not need reaffirming.

After looking through a couple of the first newsletters several years ago, I haven’t opened one since. Though we feel a fond affection for their cause (the homeless), we’ve begun treating the rather expensive newsletters like another piece of junk mail. They go unopened directly into the recycle bin.

The onslaught of marketing communications today (most of it irrelevant or unsolicited) has become like background noise that has to be filtered out. And so, I’ve become a persistent unsubscriber to the ever-increasing flood of broadcast emails. Facebook posts are automatically assigned to a social media folder where the vast majority are checked in-mass for deletion. And despite legislation to prevent robo calls, they are as frequent as ever. I’ve adopted the habit of ignoring all incoming phone calls that are not in my contact list. If it happens to be a call I want to take, the caller will just have to leave a voice message.

Talking about this with friends, they all seem to be doing the same kind of filtering—trashing newsletters, blocking or ignoring incoming calls, unsubscribing to broadcast emails.

I’m not sure what would be the most effective way of keeping donors informed. All I know is that the organization we’re supporting is wasting a lot of time and money sending us their newsletters.

EVIDENCE OF DIMINISHING RETURNS
As I commented in a previous blog post, “There’s a diminishing return on the overflow of marketing communications.” While there are a lot of success stories about crowd sourcing, internet campaigns, and initiatives that have “gone viral” (a much over-used term), most of these are anecdotal accounts from companies marketing their direct mail or social media services. When you factor out those who have something to sell and review only scholarly and industry-generated data, a much different perspective quickly emerges. Below are a few facts about reliance on electronic media for donor engagements (touches) leading to actual donations.

NextAfter.com benchmark statistics revealed the most astounding of all donor-communications trend regarding online giving.

Some of the data from NextAfter is astonishing, and the reasons seem to be the reliance on automation. After all, the NextAfter survey also reports that only one in five nonprofits sent email communications from a real person.

What is even more astounding is that 71% of nonprofits worldwide still agree that social media is effective for online fundraising (Global NGO Technology Report). Given the dismal results, that kind of irrational enthusiasm suggests there are some profound myths about the effectiveness of social media as a fundraising tool.

MYTHS OF SOCIAL MEDIA EFFECTIVENESS
First of all, let me say that while Warren Buffet can get away with writing one investor letter per year for the last 50 years, nonprofits of any size cannot. See EFFECTIVE DONOR COMMUNICATIONS: How Warren Buffet Makes Less Become More. Every nonprofit organization has to have a presence on two or three social media platforms lest they are perceived as living in the electronic dark ages. However, there are at least four myths about pushing out online or broadcast donor communications.

Myth #1: We regularly communicate with our donors through direct mail and our social media platforms. I was talking with my wife, Sheryl, a couple months ago and casually made the comment, “I’ve been affiliated with a particular university for most of my adult life, but they’ve never once asked me for a gift.”

Sheryl replied, “Eddie, they send you letters all the time asking you for a donation.”

Standing corrected by my wife (a not-so-seldom position for me), I realize that it had been years since I opened and read one of those letters. And so, I’m not sure if the purpose of the letters was to inform or solicit. In fact, I walked into my office on a typical Tuesday morning in mid-February and retrieved four publications from my box. I never got around to opening (let alone) reading them. Then I sat down at my computer and deleted five broadcast emails from other nonprofits. I had gradually adopted the habit of my friend with his aggressive filtering of non-essential information. Simply because nonprofits are pushing out letters, emails, and posts does not mean they are actually communicating with donors.

Myth #2: Efficiency and effectiveness are often mutually exclusive. Several months ago, I had a phone conversation with two executives who had been brought in to serve as the interim CEO and CFO of a hospital in the Midwest. Both are very seasoned professionals. They wanted to discuss their foundation and its fundraising efforts. Prior to our conversation, they had sent me their latest audit and ledger to review. Most of the money that was raised was either through direct mail or special events. The nonprofit had one staff person in charge of those functions and had contracted a marketing firm to manage the lion’s share of the work.

I had gradually adopted the habit of my friend with his aggressive filtering of non-essential information. Simply because nonprofits are pushing out letters, emails, and posts does not mean they are actually communicating with donors.

There was no shortage of wealthy individuals in that area. However, what stood out in the financial reports was that after the cost of the marketing firm, printing, and postage, the hospital’s net income from their efforts was only 9%. My comments were pretty obvious. It would be far more effective to hire a really good major gift officer who spent 75% of his/her time having conversations with and making funding appeals to donors. See FUNDRAISING SIMPLICITY: The Paralysis of Self-imposed Complexity. Both senior executives had experience in larger organizations who understood the dynamics of philanthropy and donor relations. They readily agreed—that had been their experience as well. However, the argument from the board was, “This is the most efficient (the easiest) way to do it.”

“That may be true,” the executives replied, “but with regard to our measurable outcomes, it’s not the most effective return on investment (ROI).”

The last I heard, the board is still deliberating.

Myth #3: Hiring a major gift officer is a step forward in building donor relationships and in securing major gifts. That could, in fact, be true and not a myth. However, it can also be a step backwards if you hire the wrong person and keep them tied up in the office. Becoming a great organization at all levels is all about “getting the right people on the bus and engaged with donors on a personal level.” As I’ve said before, I would rather have one major gift officer who was committed to excellence and accountability than a dozen who are satisfied with mediocrity. Assuming the organization makes the perfect hire, the myth is that it will make a difference without empowering that gift officer to be successful. In other words, CEOs and the senior leadership team have to hold gift officers accountable for spending the majority of their time meeting with existing and potential donors. At the same time, they need to diligently protect gift officers from becoming entangled with non-fundraising activities. See GETTING THE RIGHT PEOPLE ON THE BUS.

Myth #4: Building relationships with donors is the key to raising more money. Donor relationships and donor conversations (personal touches) is an essential step to increased funding, but it’s not THE key. Eventually, you’re going to have to ask for the gift. See THE EFFECTIVE ASK: Sticking to a Script or Flying by the Seat of Your Pants.

NONPROFIT LEADERS, ESPECIALLY THOSE beginning to rely increasingly on tweets and posts to sustain their donor relationships, need to remind themselves that you can effectively raise awareness though non-personal communication, but you cannot effectively raise substantial dollars. And the larger the potential gift, the less effective the “impersonal touch” becomes. Though there are rare exceptions, this is about as close to a universal fundraising axiom as you can get.