GETTING THE RIGHT PEOPLE ON THE BUS: The Neurotically Obsessed with Excellence 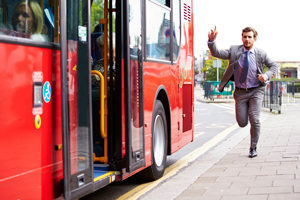 In 2007, six years after publishing Good to Great, Jim Collins wrote a 35-page booklet applying the principles to the nonprofit world—Good to Great for the Social Sectors: Why Business Thinking Is Not the Answer. That follow-up seemed to be inevitable since his own research showed that half of his readers were either employed or deeply involved with nonprofits.

As to why business thinking is not the answer, Collin asserts that there are just as many (or more) mediocre performing businesses as there are mediocre performing nonprofits. The actual dividing line between the two types of organizations is not the source of income—customer/client sales versus donor contributions. The real differences are between organizations/companies that are merely good and the few that have become truly great. With that in mind, the author applies his Good-to-Great business characteristics to five challenges that are unique to nonprofits. They are:

3) Rethinking the economic engine without the profit motive;

4) Building momentum by building the brand; and

5) Getting the right people on the bus within the constraints of the nonprofit world.

In this post I want to briefly expound upon one of those key challenges for nonprofit leaders—getting the right people on the bus. Since many who read The Fundraising Executive blog are working somewhere in the layers of the organizational chart, I’ll start with a few thoughts on becoming a great fundraiser and donor relations manager.

1. Be the employee that great leaders want to keep on their bus. At the very beginning of Good to Great and the Social Sectors, Jim Collins addresses head-on one of the greatest needs at nonprofits. He responds to a question from David M. Weekley, CEO of Weekly Homes, LLC and board chair of several nonprofits:

“In my work with nonprofits,” says Collins, “I find that they’re in desperate need of greater discipline—discipline in planning, disciplined people, disciplined governance, disciplined allocation of resources.”

I agree with Collins’s assessment, though I usually frame the need for greater discipline in the context of the need for greater accountability—accountability for time, performance, creativity, and overall work habits. Whenever I interview candidates for positions at any level, from the CEO to the rookie fundraiser, I always try looking for the moments and experiences that have defined their feelings about accountability and personal discipline. I first come at it indirectly, hoping to sniff out the true answer rather than the answer they think I’m looking for. I’ll eventually come back and press the issue more directly. That’s when I begin paying close attention to their body language.

Whenever I interview candidates for positions at any level, from the CEO to the rookie fundraiser, I always try looking for the moments and experiences that have defined their feelings about accountability and personal discipline.

Generally speaking, development professionals relate to personal and professional accountability in three ways—some love it, others tolerate it, and then there are those who simply hate it. Obviously, you never want anyone on your team who hates accountability. They’re often trying to keep others from discovering what they’re really doing or not doing. The toleraters are those willing to be held accountable if their supervisor insists. The lovers are those who hold themselves accountable even if no one else does.

Collins identified the most important people to get on the bus—employees who are neurotically obsessed with excellence in everything they do. Those are the ones who love accountability and are deeply disappointed when no one asks them to give an account for their performance or challenges them to do something extraordinary. In fact, NOT being regularly called upon to give account for their performance is for the neurotically-obsessed-with-excellence an indicator of disrespect. See THE CASE FOR ACCOUNTABILITY: Why I Love It and Would Feel Lost Without It.

2. Make everything around you as great as it can be. My career began in a development department that lacked a disciplined governing strategy, a disciplined action plan to follow daily, or a disciplined system of accountability. There were a lot of things to complain about. I was not satisfied with simply punching a time clock or shuffling through the giving records of long-lapsed donors. However, I needed to stop moaning about the way things were, draw a circle around myself, and get busy managing the few things under my control. I was a rookie and an idealist, having not yet learned all the reasons why things couldn’t be done.

Collins identified the most important people to get on the bus—employees who are neurotically obsessed with excellence in everything they do.

My personal pursuit for survival in that organization began with a 12-month schedule of what I imagined a fundraiser ought to be doing every day. That plan scribbled on a 12-foot roll of butcher paper became the roadmap for my fundraising career, secured the organization’s largest gift to date, and landed me in the office next to the university president, who for several months didn’t even know my name (See MANAGING DEVELOPMENT: Getting the System Right).

That particular phase of my career reminds me of a story included in Good to Great for the Social Sectors. Roger Griggs was a Colorado public high school teacher who was unsatisfied with mediocrity and believed that their school should be much better. He too had no authority nor opportunity to make major changes. He also drew the circle around himself and focused on his own performance. As a result, he was eventually promoted to head of the 14-person science department.

Two staff departures enabled Griggs to hire a couple of teachers who seemed to be as passionate about their profession as himself. Great science teachers are hard to find, let alone those who are neurotically passionate about their subject. He was also beginning to discover that getting others off the bus was even harder. Teacher unions protect both excellent and underperforming teachers.

Previously, a recommendation for tenure was automatic after three years. However, Griggs considered the first three years as an extended interview and told his newly hired teachers, “You are unlikely to receive tenure unless you prove yourself an exceptional teacher.” A turning point for the school, at least for the science department, was when Griggs opposed granting tenure to one of his teachers. “He was a good teacher,” Griggs explained, “but not a great one.” Over the coming years the culture of discipline tightened hire by hire. As the number of teachers committed to high standards of excellence grew, the deficiencies in underperforming teachers became more and more obvious. In the following years, many of those content with mediocre performance self-ejected from Roger Griggs’s science bus.

People who work at nonprofits are notoriously underpaid in comparison to the business world. Hopefully, that will change. However, the key variable for both nonprofits and for-profits is not WHAT you pay or (in the case of volunteers) IF you pay but WHO you have on the bus. If a person is not compulsively driven to be and do their very best, there is no amount of financial incentives that will motivate the otherwise unmotivated or undisciplined. It’s either part of their DNA or it’s not. Jim Collings writes:

The number of fundraisers is not as important as the right kind of fundraisers. I would rather have one great fundraiser who was neurotically obsessed with excellence than a dozen aiming at the status quo.

Consequently, when you find one of those people who have both the will and the skill in the sustained pursuit of excellence, PAY WHATEVER IT TAKES TO KEEP THEM! One of the irreplaceable characteristics of great organizations is getting and keeping the right people on the bus—even if it takes years to do it.

Putting it another way, the number of fundraisers is not as important as the right kind of fundraisers. I would rather have one great fundraiser who was neurotically obsessed with excellence than a dozen aiming at the status quo. Why is that? As in the case of Roger Griggs, a disciplined commitment to excellence attracts more of the same and repels those who settle for less.

For more on getting and keeping the right people on the bus see:

Waiting for the Right CEO in CHIEF EXECUTIVE TURNOVER: Intangible Rewards of Selecting the Right Candidate.

The Zappos approach to selective hiring in CULTURE OF PHILANTHROPY: What Nonprofit Leaders Can Learn from the Industry-leading Customer-service Company.

Succession planning and leadership continuity at AnMed Health in NEXT UP: A Rare Example of CEO Successions.

More on Jim Collins’ book, Good to Great for the Social Sectors: Why Business Thinking Is Not the Answer.