LEVEL 5 LEADERSHIP: Getting Things Done Within a Diffused Power Structure

By Eddie Thompson | April 22, 2019 | Development Management
← GETTING THE RIGHT PEOPLE ON THE BUS: The Neurotically Obsessed with Excellence
WEATHERING THE STORMS: Practice-management Strategies That Ready Your Organization →
Share
Share4
Tweet
Email
Print 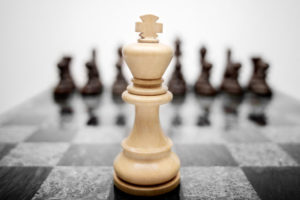 This is the second in a series of several posts on Jim Collins’s booklet entitled, Good to Great and the Social Sectors. In this 35-page supplement to his bestseller, Good to Great, the author identifies and comments on five challenges that are unique to nonprofits and why business thinking is not the answer. One of those challenges was being effective as a nonprofit leader within a diffused power structure. First of all, a quick summary.

DIFFUSED POWER STRUCTURES
The dynamics of effective leadership within nonprofits are quite different than in the for-profit world. Business leaders commonly operate in more of a command-and-control power structure. They are the corporate generals who dictate strategy and issue direct orders. Subordinates down the chain of command are expected to follow—in many companies, without question or comment.

Though nonprofit leaders at times wish they could wield this kind of executive power, it rarely turns out well when utilized in a volunteer environment. Perhaps, some of those leadership dynamics could be similar for a nonprofit’s paid staff. However, the entire nonprofit system survives with volunteer helpers and volunteer donations. Consequently, effective nonprofit leaders have to be masters of relationships, influence, and persuasion.

Collins distinguishes between the for-profit and nonprofit sectors in the context of their fundamental power structures. Effective leadership in the for-profit world is typically an EXECUTIVE PROCESS. Things get done in the nonprofit world primarily through a LEGISLATIVE PROCESS. In other words, the efficiency of executive (sometimes dictatorial) power versus the slowness (sometimes messiness) of legislative power. It’s for this reason that business leaders transitioning to nonprofit leadership often have a steep learning curve. And learn they must if they are going to be successful nonprofit leaders.

Effective nonprofit leaders have to be masters of relationships, influence, and persuasion.

Below are two real-life examples from my own experience—the worst of the bad and the best of the good. Both organizations began with some serious leadership deficiencies. Then after changes at the top, one organization descended into chaos while the other resulted in one of the fastest and most remarkable transformations I’ve ever seen. Few organizations are this bad or this good. Though these extreme situations are rare, they highlight leadership principles by turning up the contrast until all the gray areas disappear.

EXAMPLE #1: THE DRILL SERGEANT
I was once involved as a consultant for a large nonprofit with regional offices all across the country. One of the senior executives at the home office related to his team and ran the organization with a strict command-and-control leadership style. I’ll refer to him as the “Drill Sergeant.” That is not to suggest that his militaristic style was structured and highly disciplined… far from it. Instead of a methodical approach, his leadership was maddeningly chaotic. Every meeting with regional leaders would introduce a new agenda and strategy. Drill Sergeant was extremely confident and thought he knew everything. However, his confidence was seriously misplaced. Each new strategy and course correction killed any momentum that had been accumulated since the last meeting.

After changes at the top, one organization descended into chaos while the other resulted in one of the fastest and most remarkable transformations I’ve ever seen.

And as far as relating to the team, he certainly had burnt a lot of bridges. He commonly used harsh, colorful language to make his points. The repeated phrase, “I’m going to hold you accountable” came across as more of a threat than a commitment to excellence. Most of his relationships had become so toxic that even the things he did well were discounted by those serving under him. His leadership approach did, in fact, unify the regional team members—that is, they were unified against him. You could feel the tension and animosity among that group of organizational fundraisers whenever he entered the room.

There are several other examples that would illustrate his leadership style, but you get the picture. Still, such an extreme example is hard to imagine. I could hardly believe it myself, and I had a ringside seat at many of the meetings. Periodically, I would pull him aside and say, “You just cannot treat people this way.” But he would typically reply, “But I’ve got to get them moving!”

There were several other surprising elements in this story:

1) The CEO did not involve himself with fund development and basically let Drill Sergeant do whatever he wanted to do. So, the problem actually began at the top.

2) Ironically, Drill Sergeant was not technically the regional fundraisers’ supervisor. I never really understood how he became the de facto leader of that group. I suppose he had simply inserted himself into that position.

3) It was amazing that the Board did not terminate his employment sooner. The only reason regional staff didn’t quit was that they only had to deal with him periodically.

4) This is perhaps the most amazing thing of all: Based on my personal conversations with Drill Sergeant, I believe he was genuinely committed to the mission and wanted the institution to be truly great. Somewhere along the way, he had adopted a leadership approach that was unworkable, particularly in a nonprofit context.

Eventually, he was fired for unrelated reasons. However, he was not replaced. The CEO, who was previously uninvolved with fundraising, assumed his responsibilities. As a result, the organization descended into greater chaos, and the regional fundraising shops began managing themselves. Those that were doing well actually improved with Drill Sergeant’s departure. Those that were struggling, struggled even more.

EXAMPLE 2: THE GREAT HEART
The other example is of a university President who also had his own brand of dictatorial leadership. What saved the university was a vice-president who had served under that President for 30 years. By the time the President finally retired, the college was in a financial mess. I’ve never heard that there was any financial impropriety; things were just poorly managed.

The Board chose the vice-president (I’ll call him the “Great Heart”) as the President’s successor. He had for many years served as a buffer between the past President and staff. Consequently, he already had the enthusiastic support of the university’s leadership team working under him. The first thing he did as incoming President was to remove the sign designating the presidential private parking space. Parking is always a problem on university campuses. It was his way of signaling that things would be done differently. The new President continued parking in the last space in the last lot.

His first speech to the leadership team went something like this: “I can’t do this alone; my role here is as a servant to you all. I want to enable each one of you to be the best you can be.” The Great Heart exemplified a model of servant leadership long before that idea became a popular leadership topic. He was self-effacing, willing to make fun of himself, and made everyone he met feel like they were the most important people. The organization, primarily the administration, was transformed immediately. It was quite astounding. It would be hard to say that the Great Heart did it single-handedly, but he simply empowered others to do the transforming. Better said, “He allowed the transformation to happen.” He was the greatest leader I’ve ever been associated with.

LEVEL 5 LEADERSHIP
Jim Collins revisited some of his commentary from the Good to Great book, summarizing the difference between Level 4 and Level 5 leadership.

“(Level 5 leaders) are also ambitious first and foremost for the cause, the movement, the mission, the work—not themselves…. The combination of personal humility and professional will is a key factor in creating legitimacy and influence… Level 5 leadership is not about being ‘soft’ or ‘nice’ or purely ‘inclusive’ or ‘consensus building’… The whole point is to make the right decisions happen—no matter how difficult or painful… independent of consensus or popularity.”

If you’re thinking the Great Heart was a kind but timid leader, unwilling or unable to make hard decisions, you’d be quite mistaken. Not long after the parking sign removal and the first speech to his leadership team, the financial mess he inherited forced the Great Heart to acknowledge some hard facts and make some very difficult decisions. Most were inevitable and expected; some of his bolder moves were not. However, he had built up such a reservoir of leadership credibility, even those who disagreed with the decisions would typically say, “We don’t agree, but we trust his leadership.”

EMOTIONAL INTELLIGENCE FOR NONPROFIT LEADERS
The Great Heart was ahead of his time. This was long before Steven Covey talked about being aware of deposits and withdrawals from relationship accounts in 7 Habits of Highly Effective People. Leaders who are very low on Emotional Intelligence (EQ) often over-estimate the level of relationship capital in their accounts. They are shocked when they realize they are not as respected or revered as they had imagined. I have been in a few situations where demanding leaders often felt the need to smooth things over with apologies for their draconian leadership style. Some event (like a mass revolt) made them suddenly realize that their relationship accounts were seriously overdrawn. Apologies were followed by questions like, “Are we good now?” Those low-EQ leaders didn’t seem to understand or care that solving the immediate conflict simply reconciled their debt but still left them with little to no accumulated relationship capital. It was only a matter of time before they were seriously overdrawn again. Eventually, those working under them cancel their accounts—i.e. left the company or the organization.

Leaders who are very low on Emotional Intelligence (EQ) often over-estimate the level of relationship capital in their accounts.

Collins points out that effective leadership in nonprofits is primarily LEGISLATIVE influence but occasionally requires EXECUTIVE decisions. The trick is knowing when and how to use each approach. The Great Heart understood relationship capital and was keenly aware of the equity he had accumulated. He also understood some of his executive decisions would constitute a significant withdrawal from the account balances he had with his team. He chose carefully when and where to spend that relationship capital.