WEATHERING THE STORMS: Practice-management Strategies That Ready Your Organization

By Eddie Thompson | June 3, 2019 | Development Management
← LEVEL 5 LEADERSHIP: Getting Things Done Within a Diffused Power Structure
IN THE MIDST OF A STORM: How Nonprofits Can Survive and Excel in Hard Times  →
Share
Share5
Tweet
Email
Print 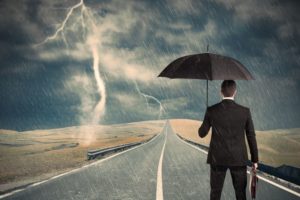 1) Economic recessions universally impact all donors and their giving capacity, as well as their “giving confidence.”  In the years between 1854 and 2009, there were 33 economic cycles, averaging about five years each. The longer a booming economy lasts, the greater the risk of an equally large recession. Even in the autumn of 2018, it was thought that the U.S. was overdue for another recession by 4+ years (Jaffe). For nonprofit leaders unprepared for an economic recession, here are a few sobering thoughts: we’ve been in a bull market since 2009, the longest period of economic growth in U.S. history.  Lending policies that almost caused a total meltdown of the United States’ financial system have become as lenient as in pre-2007, and, oh yeah, we’re in the beginning stages of a trade war with China.

2) Hard times are sometimes self-inflicted by nonprofit leadership. This can happen in all sorts of ways, from mismanagement to moral turpitude. For this brief discussion, my focus is on a less salacious but equally significant leadership weakness—short-sightedness.

3) Then there are difficulties that relate to a particular industry. The economy and donors as a whole are doing great, but for various reasons, one nonprofit sector is struggling. That has been the reality in the healthcare sector for several years. Medicare and Medicaid reimburse hospital costs at an average of 86 cents on the dollars. The total reimbursement shortfall was over $77 billion in 2017 (LaPointe). A few weeks ago, I gave a presentation to the executive team of a hospital system whose annual losses were in the hundreds of millions. In addition to the reimbursement shortfall, their situation is compounded further by an unprecedented flood of migrants into their state.

PRACTICE MANAGEMENT STRATEGIES
The list of organizational strategies below all fall into the important-but-not-urgent category. Institutional disciplines are not as exciting or newsworthy. They are, however, essential for the long-term success and survival—thus the pitfall of short-sightedness. If organizational leaders wait until one of the three types of hard times arrive, it’s often too late. In this article, I want to highlight five practice-managed strategies that help prepare an organization to weather the storms that eventually come your way.

1. Don’t lead with denial. The key to weathering a future storm is deliberately preparing for what will eventually come down the economic pike. If there is not a CEO or senior members of the leadership team who have successfully navigated through the tough time of the recession that began in 2007, it’s much easier to assume all things will continue as they have through the recent economic boom.

If organizational leaders wait until one of the three types of hard times arrive, it’s often too late.

In the book, Great By Choice, Jim Collins identifies three habits that separated 10X companies from similar companies in the comparison group—one of those habits being productive paranoia. Bill Gates, founder of Microsoft and the second wealthiest person in the world says, “I consider failure on a regular basis.” He worries constantly about some freaky high-school kid toiling away 22 hours a day in some dingy little office and coming up with a lethal torpedo to fire at Microsoft. The 10X-company leaders distinguished themselves not by paranoia per se, but by how they took effective action as a result.

2. Endowments are the best emergency funds. I’ve told this story several times, but it’s a hard-times story worth repeating. In the late 1970s, and early 1980s, the inflation rate was a whopping 15% per year, and interest rates were even higher. The cost of borrowing was outrageous, and the cost of living (particularly the cost of educating) was rising faster than universities could raise tuition. An article in the journal for Council for the Advancement and Support of Education (CASE) had predicted that as many as 50% of private colleges would go out of business.

I was a graduate student at the time, sitting in on a gathering of college presidents at Vanderbilt University. One president after another spoke about the dire consequences they faced—freezing salaries, postponing maintenance, and even laying off faculty and staff. It was as if a dark cloud had descended upon the room—that is until one president made the following comments:

“This has really not been our experience. We’ve made consistent efforts through the years to build our endowment. It’s been an ongoing priority for us. Because of the high-interest rates, this inflationary period has actually been our best friend financially.”

When he had finished for the next few moments you could hear a pin drop. Several other presidents seemed to clear their throats and commented that they too had endowments. However, it was pretty obvious that their respective institutions were not so endowed as to cause soaring interest rates to become their best friends.

3. Create a deliberate after-action review process. The Wall Street Journal reported on a survey of 620 employees in various industries in the U.S. Seventy-three percent said their companies had no defined post-mortem analysis after major events or periods. Of those companies that did have a standard after-action review process, only 6% said that the analysis followed both good and bad periods. In other words, 94% of the companies surveyed conducted post-mortem evaluations only after significant failures (WSJ, May 14, 2019). Organizations in crisis will revert to practices they assume were the essential ingredients of past successes. However, without a careful and honest process assessing previous wins—more often than not, they’re just guessing.

4. Manage annual growth. Serving more people and serving them better is what drives and motivates nonprofit leaders and staff. Sometimes, however, they’ve expanded more rapidly than they can afford. The question is: How fast is too fast? Over-extended organizations are vulnerable to all three types of hard times. One of the principles of managed growth comes from an article I wrote for Healthcare Philanthropy Journal (see INSTITUTIONAL SUSTAINABILITY: Transitioning from “Hunter-Gatherer” Mode to a Cultivation-based Strategy for Long-term Fundraising Success).

Ninety-four percent of the companies surveyed conducted post-mortem evaluations only after significant failures.

Establish a discipline of planting, harvesting, and adding new fields. Each time you expand your program, you should simultaneously (have a plan to) expand your fields; that is, expand your donor base.  Then, measure and monitor the expansion of your donor base as precisely as you do the expansion of your program, so you can create realistic projections. Donors want to see growth and broadened impact in the programs they support, but they are wary of expansion plans that rely on the same group of people for funding.

Again, one of the key factors that separated the 10X companies (Great by Choice) from the comparison group was fanatical discipline. The CEOs at Southwest Airlines, Progressive Insurance, Stryker, and others 10X companies insisted on a minimum percentage in annual growth but were equally determined to limit the company’s annual growth (see Great By Choice: Twenty-mile Marching for Nonprofits).

5. Evaluate the board. Organizations (for-profit and nonprofit) sometimes get sloppy, wasteful, and generally less efficient during good times. That is true at all levels of the organization, but especially true at the top. Hard times reveal a lot about the commitment and leadership of the board of directors. However, that is a long-term process that is developed over many years. Trying to develop a sophisticated board selection and performance-evaluation process in the midst of a crisis is difficult to do (see THE BOARD MANAGEMENT COMMITTEE: Systems and Accountability at the Highest Level of a Nonprofit Organization).

IN THE MIDDLE OF A STORM
Consistent commitment to long-term strategies is the key to the success and/or survival of nonprofit organizations. In most cases, those strategies were instituted in times when all things were going well. It reminds me of the Parable of the Two Houses—one built on the rock and one on the sand. Trying to implement long-term strategies in the midst of a storm, can be like trying to pour a concrete footer in three feet of flood waters.

Next month—what to do (and not to do) when the hard times are already upon you.