IN THE MIDST OF A STORM: How Nonprofits Can Survive and Excel in Hard Times 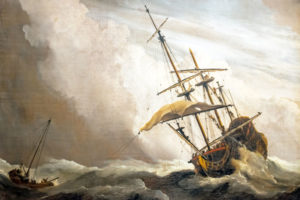 My previous post, “Weathering the Storms,” covered practice-management strategies to employ during good times that tend to harden nonprofits against three types of hard times: 1) economic recessions that universally impact all donors and their giving capacities; 2) hard times that relate to a particular nonprofit sector; and/or 3) problems that are self-inflicted by short-sighted leadership decisions. This post is about what to do if (readied or not) your organizational ship is already in the midst of a storm.

1. Be positive and proactive with your donor relations. The best nonprofit leaders develop an organizational culture that functions simultaneously with intense realism and intense optimism. Regardless of your current position, the more consistently you are able to do that, the better team member you will be and better leader you will become. In hard times (if the truth be told) most of what you have to report is bad news and it’s often hard to know what to say and what not to say. Nonetheless, your best donors will eventually find what is or is not happening in your organization. Sometimes they’ll get their intel from fellow donors or worse, from other not-so-optimistic sources. In contrast, the best fund-development shops get out in front of the problems by communicating face-to-face with as many donors on as many levels as possible. What they communicate might be something like this:

Leadership teams with the willingness and the habit of facing brutal facts in both good times and bad are far more likely to wrestle with the problems until one or more workable plans emerge. In contrast, the worst thing you can do in a crisis situation is to go silent. The best leadership teams don’t hide from their donors, and they don’t hide the truth from them. What they do is reinforce confidence in the leadership by creating and communicating possible solutions.

2. Strengthen your case for support. In good times you can get away with making a less-than-compelling case for your organization’s financial support or with less-than-consistent donor conversations. However, many donors who have given consistently in good times, in hard economic times begin the process of examining and reevaluating the importance of each organization and each gift. Some will respond by reducing their total annual giving while others simply cut back on the number of organizations they support. The only thing harder than acquiring a new donor is re-engaging lapsed donors who have already made the decision that your cause is not among their top giving priorities.

Many donors who have given

consistently in good times, in hard economic times begin the process of examining and reevaluating the importance of each organization and each gift.

Every addition of a long-time giver to the lapsed-donor list begs the question—how well have we made and how consistently have we reinforced the case for our cause? Be assured that in hard times those “best fund-development shops” that are competing for priority status in the minds of donors are reinforcing their cause with every donor they can get to.

3. Use crisis messaging only as a last resort. You’ve seen the pleas for help before—an organization is in urgent need of funding to avoid closing their doors or ending programs. While this can be an effective last-ditch strategy, it’s rarely a wise one, and it’s a bell you can only ring once (Barker). In hard economic times, donors eventually begin asking themselves, Which organizations are going to survive, which are strong enough to excel, and which ones are going out of business? Crisis messaging can have mixed results. Some will rise to the challenge with additional donations, while others might conclude they are investing in a sinking ship.

4. If all else fails, consider consolidation. Join forces temporarily or permanently with other organizations that are providing similar services to the same people. As I mentioned in the last post, many nonprofit hospitals (and actually the entire healthcare system as a whole) are going through particularly difficult times. Most (but not all) of that storm is the result of reduced Medicare reimbursements along with the imposition of a mountain of additional costly responsibilities. Since 60% of Thompson & Associates clients are hospital foundations, I’m in conversations almost every week about mergers of large healthcare systems. Most have already gone through a series of cost-cutting measures, including reducing their fundraising expenses. That happens to be one of those short-sighted leadership decisions that only worsen the problem. However, given the current situations, the mergers are their fallback position and best remaining option.

5. Get (and keep) the right people on the bus. In good times, organizations need good people; in hard times, they need great people. It’s those hard times that expose organizational inefficiencies as well as employees who are not contributing in productive ways. It’s commonly said, “A rising tide floats all boats.” What is equally true is that a receding tide reveals many of the obstacles to your success. Every organization has a small cadre of staff and volunteers responsible for positive organizational momentum. If the organization must lay off employees, it should first consider which people are central to the long-term health of the organization. They should then dedicate the lion’s share of the organization’s attention and resources to retaining and supporting these employees (Tuck, Howard, & Foster).

According to a recent report by the Bureau of Labor Statistics, all of the key indicators of employment growth in the nonprofit sector (e.g., wages, employment rates, and the total number of nonprofits) actually grew during the 2007-2012 recession, even as the economy as a whole stumbled. In fact, the study found that nonprofits grew even during the weakest point of the recession, between 2007 and 2009 (Smith). 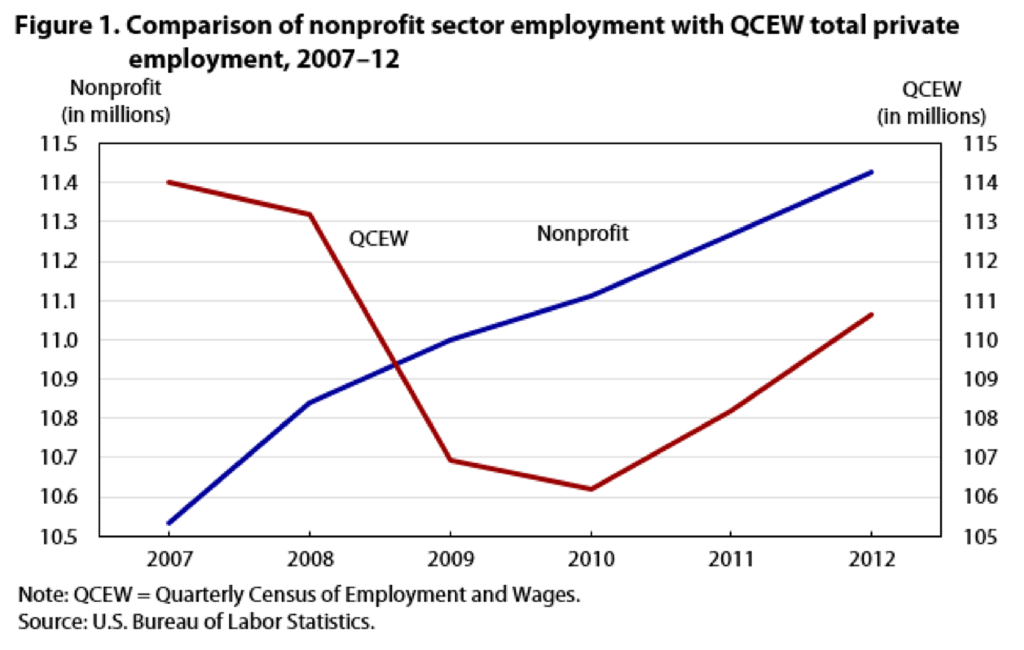 Head hunters know that in an economic recession, they’re operating in a target-rich environment. Some of the nation’s top business executives with lots of nonprofit involvement are ready to abandon for-profit companies to devote themselves full-time to nonprofit work. This may be your opportunity to recruit an extraordinary executive or board member for your team.

The fact that the number of nonprofits and nonprofit employees continued to grow rapidly in the years 2007-2012, doesn’t mean the nonprofit sector was doing better than the overall economy. The economic downturn during those years resulted in one of the largest year-over-year declines in charitable giving since the late 1960s. Total giving in 2008 fell by 7 percent in inflation-adjusted dollars, from $326.6 billion to $303.8 billion. In 2009, matters worsened, with charitable giving dropping another 6.2 percent to approximately $284.9 billion. Overall, charitable giving dropped 10.9 percent between 2007 and 2010 (Stanford).

The multiplication of nonprofits and the decrease in annual giving put nonprofits in a tight squeeze. The sentiments of many donors and grant-making foundations were: There are too many nonprofits and too much duplication of services. Those thoughts and donor comments revealed a gap between the perceptions and priorities of major donors and nonprofit leaders. All the more reason to cultivate leadership habits and implement policies in the good years to prepare the organization to survive and even excel in the lean years.

“If we merely aim for the industry standard, then our goal is mediocrity.  Emulating the average nonprofit, we are destined to live with all the problems the average nonprofit faces. So, we suggest you aim to be exceptional in your approach to fund development.”  —Eddie Thompson