By Eddie Thompson | February 10, 2020 | Donor Communications
← IN THIS TOGETHER: Creating a Sense of “We-ness” Among Donors
FUNDRAISING OBJECTIVES IN A PANDEMIC: Great Challenges and Great Opportunities →
Share
Share2
Tweet
Email
Print 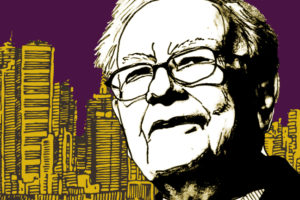 Written communications in the form of newsletters, emails, or social media posts have become standard practice for all nonprofits. The assumption that seems to drive some organizations is that if some is good, then the more the better. There is, however, a diminishing return on the overflow of marketing communications. So, the questions are not how much donor communication can we push out or even how much is appropriate. The far more important question is how to make less become more effective.

There’s no better example of doing more with less than the Berkshire Hathaway conglomerate and the annual letter to investors from the Chairman of the Board, Warren Buffet. Buffet’s annual letters are as legendary as Berkshire Hathaway itself—so much so that every investor letter since 1977 is available online from Berkshire Hathaway. Letters from 1965 through 1976 are available in book form at Amazon.com. If you think of nonprofit donors as investors and the return-on-investment as the good work nonprofits do, then Buffet’s letters are a fascinating read.

CULTURE AND CHARACTERISTICS
According to Forbes’ Global 2000, Berkshire Hathaway is the third largest public company with total assets over $700 billion and the largest financial services company by revenue in the world. Since 1965, the S&P has grown at an annual rate of 9.7% including dividends. During that same period Berkshire Hathaway has averaged an annual growth rate of 19%. Like all other financial services companies, Berkshire Hathaway investor relations relies almost exclusively on written communications. For organizations whose donor relations is driven by written communications, the characteristics of Buffet’s leadership style reflected in his annual letters are good examples to follow.

If you think of nonprofit donors as investors and the return-on-investment as the good work nonprofits do, then Buffet’s letters are a fascinating read.

1. Shockingly Self-effacing and Deferential
I seriously doubt that any annual shareholder letter is as personally and organizationally self-effacing as what Buffet writes every year. There seems to be no mistake or miscalculation omitted.

Regarding an early missed opportunity, he says, “That was a monumentally stupid decision.”

A few paragraphs later, “Undeterred by my first mistake of committing much of BPL’s resources to a dying business, I quickly compounded the error. Indeed, my second blunder was far more serious than the first, eventually becoming the most costly in my career.”

Twenty-five years later, Buffet comments on a $433 million mistake: “As a financial disaster, this one deserves a spot in the Guinness Book of World Records.”

Each of Buffet’s letters not only highlights his own mistakes but goes onto explain WHAT he learned, WHY that is better of Berkshire Hathaway shareholders, and the story of HOW Vice-Chairman, Charles Munger, and he came to that conclusion.

Buffet is also in the habit of crediting every aspect of Berkshire Hathaway’s success to his small team of managers. If investors didn’t know better, they might think, “Maybe we should get rid of this Buffet guy. His repeated blunders are warnings of more mistakes waiting to happen.” However, rather than deterring investor confidence, Buffet’s graphic descriptions of his every mistake actually bolsters his credibility. The analysis of previous mistakes and future investment strategies is not always easy to follow, but for sophisticated investors, his reasoning is quite compelling.

Most organizations go to great lengths to frame their story in the context of their wonderfully successful programs or as needy organizations in continual crisis. It takes an extraordinarily secure leader to be so forthcoming about his own shortcomings and be so enthusiastic about the leadership qualities of those under him.

2. Intentionally Personal
The average price per share of Berkshire Hathaway stock is over $300,000. So, only about 6% of the shareholders are individual investors. But that does not stop Buffet from communication in a very personal way. In fact, the character, style, and content of Buffet’s annual letter is radically different than any comparable institution. Every other piece of investor communication I’ve read is almost incomprehensible and about as reader-friendly as a 35-page disclosure agreement for a new cell phone service.

It takes an extraordinarily secure leader to be so forthcoming about his own shortcomings and be so enthusiastic about the leadership qualities of those under him.

In the February 23, 2018 letter to Berkshire Hathaway shareholders, 18 times Buffet refers to himself and Vice-Chairman Charles T. Munger, as “Charlie and me.” Buffet often follows up an explanation of a highly complex investment strategy with an illustration, helping shareholders grasp the concept. One of his favorite illustrations relates to buying stocks in a troubled company at a deep discount.

“Buying the stock at that price was like picking up a discarded cigar butt that had one puff remaining in it. Though the stub might be ugly and soggy, the puff would be free. Once that momentary pleasure was enjoyed, however, no more could be expected.”

3. Family-oriented
Communications professionals understand the power of influence when there is a real or imagined family connection. Fraternities and sororities refer of members as “brothers” and as “sisters.” The slogan for a church in my city is, “We are Family.” Tightly knit groups have begun to refer to members as “Our tribe.” Nationalistic extremists commonly refer to the “Fatherland.”

Buffet seems to understand the power of kinship as well. He often addresses fundamental concerns in terms of “individual investors and (their) children.” In the 50th anniversary investor letter, Buffet addresses investor concerns about Berkshire Hathaway’s future after he and Charlie are gone. Under the heading, The Next 50 Years at Berkshire, he begins: “I will tell you what I would say to my own family today if they asked me about Berkshire’s future.” One investor, who is also an expert in persuasion theory, commented, “He had me at ‘family.’”

4. Investor-centered
Of course, Buffet inspires confidence by reminding his investors about the culture and values Charlie Munger and he have built into Berkshire Hathaway. In one of his investor letters he writes:

“No company will be more shareholder-minded than Berkshire. For more than 30 years, we have annually reaffirmed our Shareholder Principles, which always begin with: ‘Although our form is corporate, our attitude is partnership.’ This covenant with you is etched in stone.”

In a nonprofit, that commitment would translate to being genuinely donor-centered. As I wrote in a blog post several years ago, that’s often more difficult for a nonprofit to accomplish than you would think. See The Greatest Fundraiser of All.

5. A Culture of Accountability
The Berkshire Hathaway 2014 annual meeting in Omaha, Nebraska was attended by almost 40,000 investors. At that meeting, three financial journalists led a question-and-answer session, asking Buffet and Charlie Munger questions that shareholders had submitted to them by e-mail. There seems to be no concern for hiding any aspect of the conglomerate from investors. They also had a panel of three top independent financial analysts drill the two top executives. “Neither Charlie nor I will get so much as a clue about the questions headed our way. Some will be tough, for sure, and that’s the way we like it.” See CASE FOR ACCOUNTABILITY: Why I Love It and Would Feel Lost Without It.

6. A Lean, Mean, Investing Machine
Regarding the future and the next Berkshire Hathaway CEO, Buffet writes:

“Tone at the top will be key to maintaining Berkshire’s special culture. (The next) CEO must be all in for the company, not for himself. It’s important that neither ego nor avarice motivate him to reach for pay matching his most lavishly-compensated peers, even if his achievements far exceed theirs…”

“My successor will need the ability to fight off the ABCs of business decay, which are arrogance, bureaucracy and complacency. When these corporate cancers metastasize, even the strongest of companies can falter.”

Most are shocked to learn that the $700-billion Berkshire Hathaway conglomerate has a staff of only 24 people. Buffet illustrates his resistance to bureaucracy with the comment:

“The extraordinary delegation of authority now existing at Berkshire is the ideal antidote to bureaucracy. At headquarters, we have never had a committee. We don’t have a legal office nor departments that other companies take for granted: human relations, public relations, investor relations, strategy, acquisitions, you name it.”

“We do, of course, have an active audit function; no sense being a damned fool.”

7. Attitude of Gratitude
Serving as the Berkshire Hathaway Board Chairman with the responsibility of final decisions on behalf of individuals and institutional shareholders has to be stressful beyond what only a few can imagine. And yet what Buffet communicates in his investor letters is that no team of financial professionals has more fun at what they do.

Most are shocked to learn that the $700-billion Berkshire Hathaway conglomerate has a staff of only 24 people.

Warren Buffet is shockingly self-effacing, defers all the credit of the organization’s success to his team, communicates with investors like they are family members, is intensely investor-centered, and demonstrates an extraordinary commitment to stewardship and accountability. Those characteristics are front and center in each of the 54 letters to the Berkshire Hathaway investors.

I’M NOT SUGGESTING that nonprofits communicate with donors once a year with a 35-page letter. However, the character and commitments of an organization are what attract donors—more than any number of broadcast emails, social-media posts, or newsletters. When it comes to investor-donor relations, the character of Buffet’s organization and the style of his communications makes less become more.

OTHER POSTS BY EDDIE THOMPSON ON THIS TOPIC:

The Greatest Fundraiser of All.

CASE FOR ACCOUNTABILITY: Why I Love It and Would Feel Lost Without It.