IN THIS TOGETHER: Creating a Sense of “We-ness” Among Donors 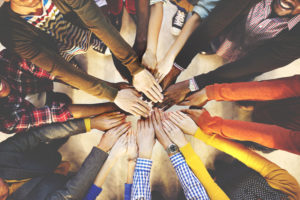 Persuasion researchers note that people are highly motivated to favor individuals when convinced that those persons are truly for or with them—not merely like them. The same thing is true for organizations, and as a consequence, nonprofits typically refer to donors as partners, stakeholders, or club members. The objective is to create a sense of “we-ness” among financial supporters. In other words, this is what we are doing together—our programs and your money.  Irrespective of the commonly used terms for donors, a genuine sense of “we-ness” is not easily achieved.

The habit of listening and taking seriously the ideas or concerns of donors can indeed have a significant impact on the sense of “we-ness” and create a genuine sense of partnership.

One way to build that sense of togetherness or we-ness in your donor relationships is to simply listen and take seriously things they have to say about your organization. Sometimes fundraisers are geared up to make the case for support and get to the close (secure the donation). They’re not big on listening to what donors think the organization should be doing. Sometimes that’s true even with major donors. The habit of listening and taking seriously the ideas or concerns of donors can indeed have a significant impact on the sense of “we-ness” and create a genuine sense of partnership—that is, “we” are in this effort together. Below is an example of how this can work.

THE BIG LISTEN
I met with one particular donor (a.k.a. Mr. Jones) for breakfast at Shoney’s in Green Hills (west Nashville area) every December for nine years. It was not a solicitation; his annual gift commitment had already been agreed upon. The purpose of the annual breakfast was to collect his check, to look him in the eye, and tell him again how much we appreciated his ongoing support. It was also to give him an update on the organization—a candid and detailed report on our greatest wins and most serious challenges.

NOTE:  Those yearly meetings were an essential element of a fundraising strategy that I followed throughout my career and was primarily responsible for my success. I had outlined the plan on a 12-foot piece of butcher paper, which still sits rolled up on my desk after 35 years (see CULTIVATION STRATEGY: Fundraising for Your First Quarter).

Mr. Jones was a quiet man—modest but extremely successful in business. He was very generous to us but certainly not the organization’s biggest giver. However, he had been giving annually for a long time, even before my arrival and the beginning of our annual breakfast meetings. He also had the capacity to make an organizational changing gift from his estate.

Whether you’re leading a business or a nonprofit, there will always be ups and downs. Consequently, if all you talk about is the good news of the organization, experienced donors and business persons will quickly realize that you’re not giving them the whole story. Some of them may even be doing some of their own investigating. With this in mind, I always try to be upfront and transparent with donors.

That year, the organization I represented had been going through a significant leadership challenge. Having finished my update, the gentleman (who had been listening intently without interrupting) finally asked, “You want to know what I think?”

“Well, it probably won’t make any difference, but…”

If all you talk about is the good news of the organization, experienced donors and business persons will quickly realize that you’re not giving them the whole story.

The truth was that he had achieved more success and had more experience than our entire leadership team combined. So, I interrupted him mid-sentence, “Maybe not, but it would make a difference to me. I’d love to hear what you think.”

Then he proceeded to give me an earful of some pretty intense feelings. Though he wasn’t angry, his opinions were primed and ready to fire away. It took him about 15 minutes to download a clear and succinct analysis of our situation. Obviously, he’d been thinking about the leadership issues at our organization for a long time.

Mr. Jones concluded, “I don’t know if anything will ever come out of my suggestions.”

“I don’t either,” I replied, “but I really appreciate you sharing your thoughts. I’m going to take this back, and we’re going to talk through your ideas.”

He handed me his typical contribution, and our annual breakfast meeting was over. Two months later in February, I set up another breakfast appointment to report on the discussions we had among the organizational leadership team. There were three components to what he was suggesting. Our team thought one would work, and I explained how the other two ideas were not appropriate for where we were as an organization.

In his traditional humble and self-effacing manner, he simply commented, “I appreciate you listening. We’ll just see how it goes,” he said, “but I feel pretty strongly about it.”

Not much happened between February and the next December when we met at Shoney’s in Green Hills for our annual breakfast. As we were leaving, he stuck his head out of the car window and asked, “Can you come by my office this afternoon.” Of course, I agreed. It’s always a challenge to get donors to meet with a fundraiser. When they ask for you to come see them, that’s a no-brainer.

In those nine years, I’d never been to his office, which was located in one of the tallest buildings in Nashville. I don’t remember what I was expecting but I wasn’t surprised to discover this high-powered business executive occupied one of the more modest offices. I walked in and sat down in a metal chair with duct tape holding the padding on the arm rests. I laughed as I thought to myself, just what I might have expected for such a no-nonsense successful leader.

“You know, I really appreciated the conversation we had last year,” he began, “and I appreciate the follow up in February. It was just my opinion. I don’t know what’s the right thing for your organization, but I do appreciate you listening.”

He eventually handed me a very significant and much larger gift than he had ever given. What was far more important than that donation, was what he said as he gave me the check.

“Yours is the first organization that’s ever listened and took seriously what I had to say.”

I’ll never forget that. As a very successful businessman and a generous giver, he probably had a lot of things to say about a lot of organizations.

“Yours is the first organization that’s ever listened and took seriously what I had to say.”

A GOOD LESSON LEARNED
Through the years I’ve been frequently reminded of a principle from Harold J. (Si) Seymour’s classic, Designs for Fundraising. Si wrote, “People often want to give you advice before they give you a gift, because they want to feel like they belong.” It didn’t matter so much to my friend whether or not we implemented all of his suggestions or none of them. What mattered most, what made the biggest impression, and what he had been thinking about for an entire year was that I listened and took his ideas seriously. Feeling his ideas were discussed and taken seriously gave him a sense of being in an inner circle as one who had a voice. I simply gave him the opportunity to contribute or invest his ideas about the organization. It seems that I had inadvertently accomplished something that all nonprofits talk about but rarely achieve. It gave this donor a sense of “we-ness,” the feeling like we were in this effort together as genuine partners in a benevolent conspiracy to make a difference in our community. The gentleman continued as a faithful donor to our organization. He passed away a few years ago but not before setting up a very generous gift from his estate.

OTHER POSTS BY EDDIE THOMPSON ON THIS TOPIC:

THE LISTENING HABIT: The Donor’s Story and the Organizational Story

FUNDRAISING AND THE ART OF LISTENING: Discovering Unspoken Concerns that Hinder Giving Decisions