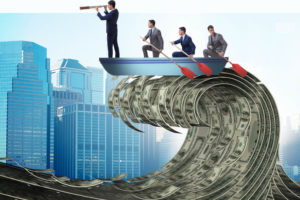 In my recent conversations with Thompson & Associates clients, we’ve all agreed that between now and the end of the year, organizations need to begin thinking through their approach to fundraising for 2021 and beyond. Given the current challenges facing nonprofit institutions, it seems like a good time to revisit a few of the concepts from previous posts that identify some of the essential principles of a successful and sustainable fund-development program.

THE MOMENTUM CURVE
In this article I’m going to step way back and talk about fundraising principles and policies from a 20,000-foot perspective. I want to distill out from the whole of our ongoing conversations five big ideas about fund-development which in one way or another contribute to the singlemost identifiable characteristic of highly successful institutions—that is, they stay on the front side of the momentum curve.

Organizational momentum is built up over time and is very intentional. It does not happen by accident.

Albert Einstein once said, “Compound interest is the eighth wonder of the world. He who understands it—earns it. He who doesn’t—pays it.” In other words, the compounding principle doesn’t discriminate but will work as powerfully for you as it will against you. Those accumulating consumer debt (debt for perishable or depreciating items) are considered living on the negative side of the curve while those making strategic investments in the future live on the positive side. Over time, the difference in net worth is very significant if not astronomical. You can also think of the curve in terms of the momentum of an ocean wave. Being on the front side of the wave tends to propel you forward with little or no effort. Being on the backside of a wave tends to really suck (you out to sea). Organizational momentum is built up over time and is very intentional. It does not happen by accident.

UNCOORDINATED STRATEGIC PLANS
The function of a strategic plan is to set in place overall principles for decision-making as the institution moves forward into the future. Of the hundreds of nonprofits with which I have worked with over the years, I’ve never found one that did not have a long-term strategic plan for the institution. At the same time, only on very rare occasions have I found an institution whose long-term fund-development strategy is governed by a similar plan. Consequently, most development departments are more reactive rather than proactive.

Below are five aspects of a strategic fund-development plan that enable institutions to remain on the positive side of the momentum curve. From a “Policy Governance” perspective, these are five board decisions that set the parameters of executive leadership.

1. The organization will focus primarily on strategies that will contribute to long-term success. In other words, leaders need to think telescopically rather than microscopically. Telescopic leaders continually ask about the impact of decisions ten, twenty, or fifty years down the road. The larger the institution, the more forward-focused leaders need to be. It’s like the difference between riding a jet ski and commanding the bridge of a 300,000-ton crude-oil tanker. Jet skis are quick and nimble, while a supertanker requires more than a mile to make a 180-degree turn and 10 miles to stop in an emergency. Consequently, when it comes to steering a large institution, the president and board of directors have to think far into the future. Very large vessels just don’t respond to rapid course corrections. If a leadership team attempts to drive a supertanker like a jet ski (with frequent course corrections), the only noticeable result will be in lost momentum.

I’ve seen more than a few instances in which the plans and policies of the institutional program were at odds or inconsistent with the plan and policies of the fund-development department, particularly in their short-term and long-term fundraising policies. A $100 million net-worth donor with whom Thompson & Associates consulted on charitable estate planning issues was very generous in his philanthropy but at the same time a bit cynical about the nonprofit leaders he had encountered. “Eddie,” he said, “These people are not serious about the future of these institutions. They’re only serious about today.” While we would say that the focal length of our vision and the measure of our seriousness are two different things, to this particular visionary leader, they were one in the same. The greatest threat to organizational momentum is short-term thinking.

2. The organization will focus on cultivating donor relationships. Institutions continually stay on the front side of the momentum curve because they’ve made (or are making) the transition from a hunter-gatherer approach to a cultivation-based sustainability plan. Prehistoric hunter-gatherer societies were dependent on bagging the kill (or the donation) in order to survive for another day. They generally remained as small, nomadic groups and failed to develop a sophisticated social infrastructure. If those people-groups did not eventually become farmers and ranchers, they usually did not survive. Game became harder to find and hunting grounds were taken over by land cultivators. Some tribes died out, while others were absorbed into larger groups or became victims of hostile takeovers.

The greatest threat to organizational momentum is short-term thinking.

One of the greatest hindrances to developing the art and science of cultivation is short-term success in hunting and gathering. Nonprofit organizations, even large ones, do not focus on cultivating a broad and renewing donor base if they have been able to get by with large public sector grants, funds from a small group of major donors, or business-related income. The current economic crisis at hospitals trying to respond to floods of COVID-19 patients reveals a critical flaw in their funding strategy—that is, an over reliance on business income from elective surgeries and a lack of cultivation of major and planned gifts.

Because learning how to cultivate as a sustainable resource strategy is far more labor intensive, hunters don’t become farmers until they are forced into it. Some wait too long.

3. The organization will maintain a balanced approach to the solicitation of current and future gifts. The long-term sustainability of any organization is largely dependent on the foresight and ability of organizational leaders to build margin into their strategic plan and to use that margin to secure the future by cultivating donor relationships that lead to planned gifts. A few years ago, the CEO of a hospital said to me quite matter-of-factly, “At this point in my career, I’m not concerned about future gifts. I’ve got four more years before I retire, so I’m only worried about raising cash.’”

Because learning how to cultivate as a sustainable resource strategy is far more labor intensive, hunters don’t become farmers until they are forced into it.

Raising cash is a good thing and so is understanding one’s own timeframe. However, this CEO had abandoned any effort to maintain a balance between current and future giving. As he was congratulating himself for his own sense of clarity and purpose, I was thinking, What a deep hole he will dig for his successor in the next four years!  I was also questioning the board’s oversight. How could they have allowed such a short-term mentality to endanger their long-term future?

As part of my dissertation research on the best fund development programs, I went out to lunch with a fundraiser from Pomona College, one of the candidates for my list of best institutional programs. They had a long track record of success with both their annual fund and their endowment. The Pomona executive explained their success by drawing two circles on a McDonald’s napkin. In one circle he wrote “D.I.” and in the other, “N.W.”

“Eddie,” he said, “every nonprofit is asking donors to write a check out of their discretionary income (D.I.). However, those requests compete with going out to eat, going to the movies on Friday night, giving to the church, etc. There is strong competition for donors’ discretionary spending. A big part of our success is that we have not only solicited gifts from discretionary income, but have consistently gone after gifts from net worth (N.W.).” That is to say, over a very long period, they had been on the front side of the momentum curve by maintaining a well-balanced approach to fund development.

4. The organization will invest in adequate staffing to effectively manage donor relationships. Great leaders understand the importance of coordinating stages of expansion in ways that maintains organizational momentum. With a cultivation-based sustainability approach, expansion plans for programs or facilities are preceded by plans to expand the organization’s fields of cultivation (i.e. donor base) as well as plans to increase the number of cultivators (i.e. fundraising staff). What usually happens, however, is that donor relations capacity (fundraising staff) continually lags far behind program and donor expansion. Organizations create expansion initiatives first. Then fundraising capacity and the donor-base expansions are forced to consistently play catch up. The result is that fund development is always on the negative side of the momentum curve.

A recent analysis of a new client showed 22,000 donors had given in the previous three years to the organization. Current staff had the capacity to visit only about 600 each year. Hiring additional fundraising staff would eventually turn into a significant net funding increase. However, the leadership wouldn’t make the investment because they were so afraid of what a few donors would say about the short-term increase in the percentage of fundraising cost on their Form 990. There is no higher return on investment than fundraising for most nonprofits. Why would you lessen an investment in what brings you the greatest return?  Why would you not invest more?

Then fundraising capacity and the donor-base expansions are forced to consistently play catch up. The result is that fund development is always on the negative side of the momentum curve.

Modern fundraising software enables development staff to track and analyze donor performance in every way imaginable—most recent gift, giving frequency, annual giving, lifetime giving, average gift, and so on. Many nonprofit executives monitor those numbers constantly. However, DONOR PERFORMANCE is a gauge I recommend that you monitor only about once a year, simply because it’s a performance metric you can’t control. All you can control is your development staff performance. Consequently, gauges related to STAFF PERFORMANCE are the ones that should command your undivided attention—calls, visits, touches, and attention to A through D category donors.

THREE THINGS I’VE learned over the years: 1) Implementing these kinds of big ideas doesn’t happen overnight. Small or newly formed organizations have to grow into some aspects of this approach; 2) that change is difficult and often resisted at older and larger institutions; and 3) whether your organization exists on the positive or negative side of that momentum curve is not accidental. It’s almost always the result of some very intentional strategic decisions and a very consistent leadership philosophy.