By Eddie Thompson | December 13, 2018 | Development Management Donor Communications
← THE BOARD MANAGEMENT COMMITTEE: Systems and Accountability at the Highest Level of a Nonprofit Organization
PENT UP GENEROSITY: Enabling the Felt-need to Give →
Share
Share6
Tweet
Email
Print 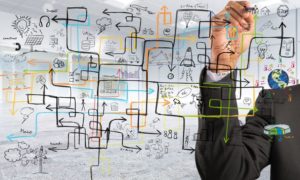 As I visit and have conversations with nonprofit leadership teams, I’ve noticed an increasing trend in organizational practices. We’re making fundraising excessively complicated. It’s true that fundraising can be difficult. However, a good advancement system is not that complicated. Put simply, the more positive conversations you have with current and potential donors, the more money you raise.

PARABLE OF MEDIOCRE SPORTS FRANCHISES
Excellence does not come easy, and nowhere is it more difficult than in the National Football League (NFL). One key to success seems to be the ability to simplify a complicated process. An NFL playbook is at least three-inches thick with hundreds of plays, from scores of formations, each designed around specific personnel groupings. If there is any doubt or hesitation about assignments, their performance level goes way down. It’s only when players know without thinking exactly where to be and what to do on any given play are they empowered to perform at their highest level.

Complex systems take time and patience to master—often more than nervous team owners can afford. And so, a new coach or coordinator is brought in with a new system for players to learn. Frequently changing schemes and philosophies have caused some teams to languish mediocrity for decades—even with many highly talented players and repeated high draft choices.

The same is true for many nonprofit development operations that pursue new and trendy strategies that offer the promise of making fundraising a quick and easy thing to do.

In my recent conversations with advancement leaders, I encouraged them to walk me though their decision-making process and to play a little game called, “This is what I know.” In most cases, development executives knew what was most important and what their people needed to be doing. And what they knew was this: The more positive conversations fundraisers have with current and potential donors, the more money they raise.

From hundreds of conversations with fund-development teams, here are few other things I know:

1. Teams and individual team members are empowered by leaders who can simplify the process. Coach Bill Belichick of the New England Patriots has been running the same system for 18 years, with regular fine-tunings based on his changing personnel. He is known for taking under-performing players who have been cut from other teams and enabling them to be highly productive in his system. The mantra Coach Belichick has consistently drilled into his players is, “DO YOUR JOB!” with the emphasis on each player’s particular job. That is Belichick’s simplified system of accountability. His approach has empowered players to excel who have been less productive on other teams. The renowned management consultant, Peter Drucker, said, “(Effective) systems enable ordinary people to do extraordinary things.”

2. Nothing Works; People Do. As I said at the beginning, a long-term commitment to a systematic approach is not that complicated. However, it’s not easy either. It requires discipline, hard work, and high accountability. In many cases, the leaders I had been speaking with were simply chasing after a magic bullet—a shortcut to avoid the difficult things they intuitively knew that they most needed to be doing.

3. When potential solutions become increasingly complex, the most effective strategy is often the first and simplest thing that comes to mind. However, that simple approach has for one reason or another been rejected because it is considered too difficult and requires more than we are willing or able to invest. You may hear excuses at every turn—some of which may be valid. For example—too many fundraisers are being held responsible for long lists of non-fundraising tasks, while being evaluated on fundraising results. This seems very unfair to me.

3. High accountability is more than assessing blame. The 2002 movie, K-19, is about the Soviet Union’s hastily constructed nuclear submarine. It’s also a great lesson in systems and accountability. In response to system failures in the submarine’s rushed construction, a Soviet Navy Admiral demanded the names of four crew members to punish. Of course, the shoddy construction practices were not their fault. In that scenario, when problems arose from ineffective systems, the first order of business is not fixing the problems but assessing blame. Because of the unrealistic timetables and objectives that trickled down from the Soviet Central Committee, the mission was doomed from the start.

The point is that without a well-designed and relatively effective fundraising system, strict accountability is meaningless and even counter-productive. See WHAT’S ON YOUR DASHBOARD: Identifying Your Key Performance Indicators.

4. Thinking outside the box rarely produces positive results. Thomas Edison’s teachers said he was “too stupid to learn anything.” He was fired from his first two jobs for being “non-productive.” Edison invented the electric light bulb but only after (in his words) “finding 10,000 ways that wouldn’t work.” I’m all for innovation, but only with a patient and carefully tested approach. That’s especially true when scaling back or abandoning effective processes that nonprofit leaders know are the keys to successful fund development—that the more positive conversations you have with current and potential donors, the more money you raise. SEE: DONOR PINGING: Firing Bullets Before Cannon Balls.

6. If you aim for mediocrity, the best you can do is hit it. A lot of people are promoting trendy ideas that will yield only moderate fund-development success. As nonprofit leaders, we don’t need to promote IDEAS as much as IDEALS. In other words, beginning with the end in mind means visualizing what the IDEAL nonprofit fundraising program would look like at it highest development. The most successful nonprofits are led by teams who aim for that vision and settle for nothing less. SEE “IDEAL” LEADERSHIP: Beginning with the End in Mind

← THE BOARD MANAGEMENT COMMITTEE: Systems and Accountability at the Highest Level of a Nonprofit Organization PENT UP GENEROSITY: Enabling the Felt-need to Give →
Share
Share6
Tweet
Email
Print