THE FINE ART OF ASKING: Developing Your Deck of Go-to Questions 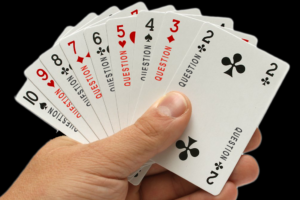 After several years working as a professional fundraiser, it’s commonly assumed that countless face-to-face solicitations will have enabled fundraisers to overcome any reluctance about asking for money. If, in a moment of honest vulnerability, an aspiring young “rain maker” admitted that he/she were terrified at the thought of making the ask, everyone would gasp for air and in the same breath whisper, “Oh, my goodness; why did you apply for this job anyway?” Then we veteran fundraisers would huddle around like old sages to offer our best advice.

Before making my own suggestions, let me say that in my early years I was terrified asking for money, particularly for major gifts. Coming from a middle-class background, it was difficult for me to imagine a donor making a $5,000 contribution, let alone a five to seven figure gift. Those first asks were characterized by such nervousness and insecurity that it’s a wonder that anyone contributed at all. I think a lot of donors agreed to give simply because they felt sorry for me.

The fear of asking can be paralyzing, a feeling most new fundraisers have to overcome. If they stick with the profession, grow in confidence, and advance in their careers, the asks will get larger and more diverse—major gifts, capital campaigns, endowments, planned gifts, etc. They’ll have to deal graciously with some demanding donors, aggressive funding goals, and a lot of “no’s.” The challenges to step-up and step beyond one’s comfort zone are never-ending and ever increasing. So, the greatest fundraisers think of overcoming the reluctance to ask as an evolving process rather than a point-in-time accomplishment.

Those first asks were characterized by such nervousness and insecurity that it’s a wonder that anyone contributed at all.

INITIAL CONVERSATIONS ABOUT GIVING
Like most fundraisers, I’ve picked up some tips along the way—approaches that take the awkward edge off the simple asks. And over the years I’ve collected a battery of go-to questions to start conversations about giving. Here are a few:

When and how did you get involved with our organization / hospital?

That’s a good question for new fundraisers meeting with existing donors. Giving history for a particular donor is easily retrieved. Understanding WHY they started giving is far more significant.

How did you find out about our organization? Was it through a friend, your work, etc.?

Nothing is more important than identifying and thanking your organizational advocates. That question will inevitably lead you to an individual who has rarely donated but is, nonetheless, an advocate for your cause.

When and how do you make your giving decisions?

Grant-making foundations have set times and criteria for funding requests. It is, of course, a lot less formal with individual donors. However, that doesn’t mean they don’t have a process, and if you’re unaware of their criteria and timeline, your organization will miss a lot of funding opportunities from individual donors.

How do you evaluate your previous gifts?

Wise fundraisers take notes and follow-up with major donors based on how they evaluate their giving.

Perhaps, some of those gifts were to your organization, which leads to the obvious follow-up:

Why was it so rewarding to you and/or how could we have made that a more meaningful experience for you?

YOUR BEST STORY
I’m always looking for new ways to initiate meaningful conversations with donors. They’re like playing cards that I hold in my hand and play at critical moments in the game. The more I collect, the easier donor conversations become and the more likely they are to agree to future visits. If you’re not a serious collector of reasons to give, organizational stories, or conversation starters, it’s like “playing without a full deck.”

A recent addition to my deck of conversation starters was suggested by one of my associates. One of his favorite go-to questions is:

My associate assures me that some of the most comical, inspiring, or poignant stories he has ever heard have been responses to that question. It seems to work much better than the general, “Tell me about yourself,” or “What are your core values?” Those leads sound so very transactional. That card (i.e., question about your best story) has to be played at the right time with the right people, and it’s not a question about giving. Nonetheless, it often reveals important things about a donor’s motivation and serves as a point of connection. My associate went on to share an example.

“The last time I asked that question, we had a couple visiting with five boys in the family. ‘What’s your best family story?’ I asked the boys. There was no immediate response, and so the conversation continued to stumble along. About five minutes later, all the boys began to talk as one after another they told their best stories. I was able to make a remarkable and unforgettable connection with that family.”

INTERVIEW WITH INDUSTRY ICON
Several months ago, I interviewed Jodi Davis, Chief Philanthropy Officer for Sutter Health in Sacramento, CA. She referred to some of her favorite go-to questions when trying to initiate meaningful conversations with potential donors. She identified two of her favorites.

What’s been your most rewarding giving experience?

What’s been the least satisfying experience?

Recently, Jodi posed those questions to a potential donor who replied, “I’m not really a donor; I don’t give a lot.”

Jodi could have ended the conversation right there but decided to press the question a little further.

“When you have given,” Jodi asked, “what was the most fulfilling experience?”

The lady who had been active as a volunteer paused for a few moments and replied, “Wow, no one’s ever asked me that.” Finally, she described a gift that she made to her church and why it was important to her. They talked together at length about the importance of that gift. This was a person with the means and the motivation to give. Jodi counted it as a successful donor conversation because it actually helped the donor begin to see herself as a philanthropist who was indeed making a difference.

I AM A PHILANTHROPIST
A subtle but important aspect of these types of questions is that they assume the best about current or potential donors—that they are already generous givers, or at least, they would like to be. It’s hard to overestimate the power of positive affirmation. If you see others with eyes of faith, it will eventually change the way they see themselves.

A subtle but important aspect of these types of questions is that they assume the best about current or potential donors—that they are already generous givers, or at least, they would like to be.

It can also change the way fundraisers think of what they do. Early on in my career as I was making one of those nervous presentations that sounded more like an apology than a funding appeal, a donor replied, “Eddie, don’t ever be ashamed to ask people to give to a noble cause that you truly believe in.” Obviously, I was far more nervous about asking than he was about being asked or about giving. That brief exchange became a giant leap forward in my self-perception as a fundraiser. I determined to no longer see myself as simply working in the area of philanthropy, I WAS A PHILANTHROPIST (literally, “lover of mankind”). It wasn’t because my contributions to the organization put me into that major-donor category. It was the result of a new life orientation—as if the balance had suddenly shifted. I began to identify with the mission of that charity more than I did the process of raising money for it. Fundraising is simply my way of helping.

REIMAGINING YOUR OCCUPATION
In the succeeding years, I’ve learned that time and experience DO NOT automatically overcome a deep-seated fear about repeatedly asking for significant sums of money—sometimes at great sacrifice to the donors. My suspicion is that there’s a lot more reluctance about making the asks than long-time career fundraisers are willing to admit. The next time someone asks you what you do, you can say as you always do, “I’m a fundraiser for XYZ nonprofit.” Or, you can try this response: “I’m a philanthropist championing causes of people in great need.” I like the sound of that because it fits how I want to see myself as a fundraiser.

Enter your information here to download Eddie's list of donor questions he has compiled over the years.