IMPOSSIBLE SHOT: Impact of Unrealistic Fundraising Targets Passed Down from Above 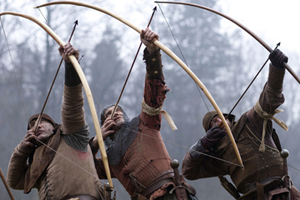 I have a lot of conversations with nonprofit professionals at all levels—from foundation presidents to major gift officers to fundraisers in their first development jobs. Among the most frequent stress points I hear almost every business day are fundraising goals being passed down from senior institutional executives who are not directly involved in donor relations, new donor acquisitions, or other aspects of the overall fund-development process. This month’s post is a brief discussion about those funding mandates and their potential effect on fundraisers and donors.

Fundraising Targets Driven Primarily by Organizational Need
Pressure from outside the development department that gets passed down to the fundraisers is often a function of organization need rather than an accurate assessment of the capacity and willingness of the donor base to give. A subtle but very real aspect of fundraising is that whenever fund development is driven primarily by organizational need, it inadvertently becomes less and less donor-centered—but, rather, more and more organization-centered. Over time, development professionals can become so focused on mandated goals that they are only minimally concerned about whether or not the amount or the structure of a gift is in the best interest of their donors. The more hardened fundraisers consider that to be the responsibility and the problem for donors, not fundraisers.

Whenever fund development is driven primarily by organizational need, it inadvertently becomes less and less donor-centered—but, rather, more and more organization-centered.

Very rarely do development professionals start out that way but after a few years of high pressure, need-driven fundraising mandates, their approach is far more transactional and far less donor-centered. If that becomes your professional profile and if organizational need is the primary factor driving your fundraising, then donors (particularly experienced donors) will spot it almost instantly. It becomes most noticeable when fundraisers are under pressure to meet funding goals, and in turn, pressure donors to give big, to give cash, and to give now.1

Emotional Account Balance
Regardless of where they originate, realistic fundraising goals cannot be established apart from the organization’s investments in long-term relationships. The Emotional Bank Account Model first appeared (as far as I know) in the leadership classic by Stephen R. Covey, The Seven Habits of Highly Effective People.2 Every time an organizational representative makes a direct appeal for a gift, he/she is making a withdrawal from the relationship account with that donor. Too few significant deposits with too many significant withdrawals, and the balances in those accounts can run very low.

When balancing a checkbook in your head, most of us typically underestimate the number of withdrawals and, therefore, the available balance in the account. The same is true with donor relationships. We tend to over-estimate the meaningful deposits and underestimate the impact of appeals for sacrificial giving (the withdrawals). You may have had the painful experience of suddenly discovering that the emotional account with a particular donor was overdrawn. The donor was not nearly as committed to your cause or in love with your organization as you had imagined.

Every time an organizational representative makes a direct appeal for a gift, he/she is making a withdrawal from the relationship account with that donor.

A recurring theme in most of my blog posts is the priority of having regular and meaningful conversations with donors. As I have said on numerous occasions, “The more conversations you have with donors and the more asks you make, the more money you will raise.” On the surface, the “more appeals equals more money” approach seems contradictory to Covey’s Emotional Bank Account model. However, the solution is not to ask less (make fewer relationship withdrawals) but to make a lot more significant deposits. Christopher Dollard writing for the Gottman Institute: A Research-Based Approach to Relationships3, cites the institute’s key to healthy, productive relationships be a 5:1 ratio of investments to withdrawals in each emotional bank account—a good rule-of-thumb for nonprofits to measure the strength of their donor relationships.

Donor-conversation Strategies
Most fundraisers would love to have more meaningful conversations with those who are funding their organizations, and they love the idea of cultivating long-term relationships. Some, however, consider investments required for all those visits and conversations to be quite expensive and very idealistic. One of the most common push-backs I hear from fundraisers is that they have difficulty scheduling meetings with donors. That didn’t start with Covid-19, but the pandemic has certainly made it more challenging. Donors rarely say to fundraisers, “Hey, you’re overdrawn in your relationship account.” Most are too busy or too considerate for those kinds of unnecessary confrontations. However, nonprofit representatives will begin to see signs of overdrawn relationship accounts with donors when they attempt to set up future meetings. It’s usually not the current request but the previous conversations that create donor reluctance.

One of the most common push-backs I hear from fundraisers is that they have difficulty scheduling meetings with donors.

Below are a few questions I repeatedly ask myself about my visits and conversations with donors.

How prepared am I for each donor conversation? Or am I just working down through my contact list, looking for someone willing to meet with me?5

Does the conversation focus on information they’ve heard a dozen times, i.e., the same old story?6

Do I talk to donors only when the objective is to secure an immediate gift?7

Am I straightforward about the health of the organization or is it a thinly veiled PR message?8

Am I sincerely donor-centered or just trying to bag another donation?9

How good am I at listening and creating two-way conversations?10

Am I talking at donors or talking with them?

These are just a few of the questions I’m constantly asking myself because if my approach becomes more superficial, organization-centered, and/or transactional, it would not at all be surprising if donors were increasingly reluctant to meet with me.

Managing Donor Relationships
Two fundraisers showed up at my office several years ago announcing the sizable donation they had determined I should make. I had never heard of the organization and had never met either of them. That is to say, they had no relationship account with me. The conversation didn’t last very long. As politely as I could, I stood up, ended the conversation, and asked them to leave. Donor fatigue is not necessarily fatigue in terms of actual giving but fatigue in being pursued by fundraisers when those fundraisers have not cultivated the depth of relationship to do so.

Alexandra Pia Brovey, J.D., LL.M. is a leader and experienced charitable gift planner. Currently, she is the Senior Director for Gift Planning at Northwell Health Foundation in New Hyde Park, New York. Here’s a brief quote from a conversation I had with Alex for our podcast series Conversations with Industry Icons.11

Donor fatigue is not necessarily fatigue in terms of actual giving but fatigue in being pursued by fundraisers when those fundraisers have not cultivated the depth of relationship to do so.

“I would say my biggest mistake early on as a fundraiser was trying too hard to [schedule] personal visits or phone conversations. I’ll never forget the mistake I made with one couple. I had tried to contact them five or six times. My heart kept telling me to stop, but my brain kept telling me to press on. When I finally, ‘caught them’ at home, the potential donor said, ‘We got all your messages, cards, and e-mails, but this time, you got us.’”

The implication was that the potential donors successfully avoided the call until they let their call-screening guard down and were “caught.” Alex concluded the story, saying:

“If you push too hard, you can easily topple things, and then you’re in a worse situation than if you waited for better timing.”

Inexperienced fundraisers don’t always have the experience (emotional or relational intelligence) to accurately judge the depth of relationship required to make significant appeals. I made the same mistakes early in my career, not due to pressure from above but simply out of insecurity. I was simply trying to prove my worth to the organization by pressuring donors to give.

Redefining Donor Fatigue
The most stressful and emotionally taxing relationships in your life are those without established boundaries. With the ease of electronic communications, my efforts to restrict the barrage of promotions and solicitations is something donors (myself included) have to do every single day. My experience has been that donors don’t like unpredictable or unmanageable relationships. Consequently, it was my habit to do whatever I could to make visits and appeals predictable and manageable. In other words, I created predictable boundaries in the donor relationships I had cultivated.

My experience has been that donors don’t like unpredictable or unmanageable relationships.

I outlined my donor cultivation process on my 12-foot roll of butcher paper and followed that for my entire career. Since many of you have heard or read my account of that process12, I’ll briefly summarize.

In the first quarter of each year, I visited my A-list donors, updated them on the organization’s victories and challenges, explained how their donations were being used and discussed what their gift commitment would be for the current year. I hand-delivered their tax receipt, expressed my sincere gratitude, and followed up the meeting with a handwritten note. I repeated the same process with my B-list in the second quarter, C-list in the third, and finally the D-list donors. Throughout the year I would make additional calls and/or send more handwritten notes. I would schedule follow-up visits when I sensed any hesitation.

A personal note: If a fundraiser knew what an easy target I was for being sincerely, personally thanked and appreciated, there is no telling what the organizational representatives could get me to do for them—only by asking.

TAKEAWAYS
There are four simple things to remember from this brief post.

3. The goal is not to simply make fewer significant withdrawals but to make many more significant donor relations deposits.

4. Fundraising goals are a function of cultivating donor relations, not the reverse.