TOOLS OF THE TRADE: Five Lessons Learned on the Fine Art of Asking 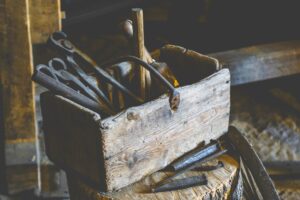 I’m continuing this month with a few more thoughts about the chosen career of a professional fundraiser—a life of never-ending appeals for donations of time and money for worthy causes. With regard to the fine art of asking, below are some of my favorite “tools of the trade.”

ASKING LESSON #1—Win the Case for Your Chosen Occupation. As a career fundraiser, the first and most important case you must make is the one you make to yourself. Everywhere you look, there’s a cause worthy of financial support. But have you convinced yourself that your particular cause is compelling enough to put yourself out there in the role of a constant solicitor—always asking, always depending on the generosity of others?

It’s easy to feel good about your career choice when it’s validated by enthusiastic donors throwing money at you. However, somewhere buried in the recesses of your mind may be an unresolved issue. Deep down, there lurks an image of a beggar on the street corner with cup in hand. It’s in hard times when that inner image begins to reveal itself—like when your ten best donors are unmoved by your latest appeal and show signs of losing their excitement for your organization. Facing those kinds of difficult situations, a weak case for the value of your occupation begins to surface. That’s when you have to fight the battle of self-perception.

If you don’t make the case for your career choice, win that argument with yourself, and win it convincingly, there will be a ceiling to how successful you can be in this line of work. That’s as true for veterans as it is for rookies. As one major donor told me early on in my career, “Eddie, don’t ever be ashamed to ask people to give to a noble cause that you truly believe in.”

ASKING LESSON #2— Stick to Your Script: A fly fisherman thinks of fund development in terms of outsmarting a trout; a former baseball player as hitting a home run. I was a pilot for 42 years and think of successful funding appeals in the context of landing my Cirrus SR22 Turbo. When navigating from point A to point B in an aircraft, you have a lot of options. You can navigate by vectors, by the compass, by GPS, or by landmarks. If you have the flying experience, you can even do some loops and barrel rolls along the way.

If you don’t make the case for your career choice, win that argument with yourself, and win it convincingly, there will be a ceiling to how successful you can be in this line of work.

The same is true when telling donors about your organization. There are no precise rules or scripts to follow. Sometimes in your enthusiasm, you can get a little off track and even a little lost in the story. But it’s not that hard to figure out where you are and get back on course. However, when it comes to landing at the airport, you have to follow a strictly defined checklist—glide slope, pitch, airspeed, flaps, landing gear, wind direction, etc. I’ve gone through my checklist so often and so methodically, I could recite it without thinking. Nonetheless, when on my final approach, I would get laser-focused on those landing procedures and followed them as carefully on my 3,524th landing as I did on my first solo flight.

One of the important lessons I’ve learned over the years is that when I am on my final approach to landing a major gift, I never deviate from my script, which includes options for giving from appreciated assets, giving as a memorial to someone, or blending a discretionary income gift with an estate gift.

New pilots have been known to repeatedly continue to circle the field as they muster up the courage to land. In my early years as a fundraiser, I could talk endlessly and passionately about the institutional cause, thinking if I took one more approach or said it one more time, it would sound better. I talked way too much and, consequently, had a hard time landing the ask.

ASKING LESSON #3—Timing is Everything. With major gifts or planned gifts, the longer you give a person(s) to decide, the larger and more likely the gift. This is just common sense. If you press people like a used-car salesman to make big decisions on the spot without deliberation or consulting with colleagues or financial advisors, you’re going to quickly alienate potential donors. Stated another way, the larger the ask, the less successful are the standard closing tactics. This correlation has limits of course. If you let too much time pass, there’s a point when that likelihood begins to diminish. Consequently, my approach to fund development evolved into repeating a 12-month cycle of planting and cultivating giving commitments with each of the couple hundred major donors assigned to me.

…the larger the ask, the less successful are the standard closing tactics.

The largest single gift I ever secured took eight years of cultivation and conversations; I worked on the second largest for six years. There are a lot of reasons why an organization would benefit from a long-term cultivation-based approach rather than a hunter-gatherer approach. This, of course, runs contrary to standard procedures at many nonprofits, including the pressure for gifts of immediate cash and/or performance evaluations based on short-term accounting procedures.

ASKING LESSON #4—Ask for the Right Amount. I’ve had the experience of congratulating myself for securing a gift, only to find out from the donor he was prepared to give ten times that amount. Even with donors I know pretty well, sometimes it’s been hard to figure out what kind of appeal it would take to get a “Yes.” Eventually, I just come straight out with it and ask HOW, WHY, and WHAT: “How interested are you in this endeavor; why are you interested; and what is the range of gift(s) you would consider?” Many fundraisers and consultants will advise, “Go ahead and ask. The worst thing that can happen is that they’ll say, ‘No.’ Then you can easily fall back to a smaller amount.” However, the lesson I’ve learned over and over is that is often not true.

That solicitation strategy is referred to by persuasion researchers as “Rejection-then-Retreat.” You may get a gift by retreating to smaller and smaller appeals, but every rejection and every retreat deflates a donor’s enthusiasm a little more. Going through a series of “no’s” to get to a “yes” can also leave the donor feeling manipulated. It’s hard to underestimate how much people (in general) and donors (in particular) hate being manipulated. It makes them feel bad about themselves and even about the gift they have made. In the end, a fundraiser may get the gift but lose the donor.

I’ve had the privilege of sitting in as an observer on numerous asks for very large gifts, and I’ve seen this happen too often. For example, a particular donor had been one of the most generous givers to the nonprofit and the ask was not beyond his giving capacity. For whatever reason, that donor didn’t feel it was the right time or the right project for him. However, the nonprofit was desperate for immediate cash, and the executive countered with several appeals for smaller gifts. I watched the donor’s body language and facial expressions. The anxiety level seemed to ratchet up with each reduced appeal. Finally, he conceded and made a gift which was a fraction of the initial ask. The smaller gift was secured, but they may have lost the donor.

ASKING LESSON #4—Face-to-Face Appeals are Far More Effective: Several years ago, a member of our extended family who works as an Emergency Medical Technician (EMT) and I were discussing what people should do in an emergency. He offered this piece of advice, “Eddie, if you ever find yourself in a situation where emergency help is needed, do not ask for SOMEONE to call 911.” Instead, his advice was: “Get one person’s attention, look them straight in the eye, point to them, and tell them to call 911.” Then immediately ask, “Will YOU do that?” His comments were so definitive; it implied that this was standard procedure and part of his training.

In 1964 there was the infamous case of an assailant who chased and attacked a woman in the street three times over a period of thirty-five minutes before stabbing her to death. Thirty-eight of her New York neighbors watched from the safety of their apartment windows, but none did anything to help. No one even called the police. There were several academic studies of this incident. In the final analysis, the woman’s biggest problem and the one that contributed to her death was that her appeals for help were directed at too many people. Everyone’s responsibility easily becomes the responsibility of no one in particular.

One of the most important lessons I’ve learned is the effectiveness of a personal ask. It is moving potential donors from implicit general concern (what needs to be done) to explicit concern (what will YOU do?). This is why I have always placed such a high priority on one-to-one conversations with donors. Brochures, websites, and aggressive social media presence can inform and even contain funding appeals, but they don’t sell. It is never the same as looking a donor in the eye and asking him or her to make a donation.

If you do something long enough and frequently enough, it’s hard not to become better at it. However, direct face-to-face asks happen less and less, having been replaced by general appeals through social media platforms, emails, web posts, and direct mail. Successful fund development has a lot to do with momentum. Fundraisers who go for weeks or months without making personal asks simply get rusty. It’s not that they’ve forgotten what they’ve learned over the years. However, most can identify with the difficulty of getting back to making personal asks after only a short break. One-to-one conversations that lead to successful funding appeals happen so infrequently that the ability to make the personal ask is becoming a lost art.