THE PHILANTHROPIC APPROACH: What Nonprofits Accomplish that Government Funding Never Can 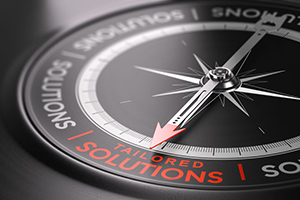 Last month’s article was about donors’ decisions to invest their social capital (contributions to community and society) by means of estate gifts to charity rather than the government in the form of taxes. It’s not that all government-funded programs are hopelessly inefficient, though there are plenty of examples of politically motivated spending or waste that is beyond comprehension. As said last month, “When it comes to strategic applications of funding to solve big problems, one essential fact stands out: the more politicized the process, the less focused the attempted solution.”

This month I want to move on from the question of EFFICIENCY to say a few words about the potential EFFECTIVENESS of philanthropy to solve systemic problems. Below are some of the reasons that government is either unable, ill-equipped, or simply unmotivated to effectively address the biggest social problems of our day. I will also share a few thoughts about the best practices of highly successful fundraisers.

1. The philanthropic approach to problem-solving has no financial limitation. Giving to a great cause is highly contagious. Word gets around and attracts other donors. One lead gift and/or one passionate donor can become an avalanche of philanthropic commitments.

Children who have been traumatized by mental and physical abuse typically see a physician for 20 to 30 minutes. The mission of the Blank Children’s STAR Center in Des Moines, Iowa (formerly the Regional Child Protection Center) is to work as a team with experts in child health, development, and welfare to provide services and support to children. The long-term objective is to increase a child’s resiliency and restore their health and well-being. The STAR Center houses a Child Advocacy Center and three specialized clinics designed to meet the needs of children and their caregivers.1

PHILANTHROPIC APPLICATION: Thompson & Associates doesn’t serve as organizational fundraisers. We exist only to assist with the estate planning needs of our clients’ donors. That being said, donors in the Midwest region have repeatedly expressed their eagerness to make major gifts to the STAR Center—gifts of cash and testamentary bequests, as well as one very large future gift in a donor’s estate plan. That same dynamic is true at other organizations that serve children in need. St. Jude Children’s Research Hospital in Memphis, TN attracts donors like mosquitoes to a bug light. What can touch potential donors’ hearts more than a sick or abused child, especially donors who have had that experience themselves? St. Jude has a unique operating model. In the years ahead, an estimated 87% of the funds necessary to sustain and grow St. Jude will be raised each year from generous donors who have joined in a common cause: Finding cures. Saving children®. 2

2. A philanthropic approach is not only decidedly optimistic, it is the one form of funding that can be decidedly multigenerational. In 1785 the French mathematician, Charles Joseph Mathon de la Cour, wrote a parody of Benjamin Franklin’s Poor Richard’s Almanac in which he mocked Franklin’s unbearable spirit of American optimism. The Frenchman fictionalized about “Fortunate Richard” leaving a small sum of money in his will to be used only after it had collected interest for 500 years.

Franklin, who was seventy-nine years old at the time, wrote back to de la Cour, thanking him for the great idea and telling him that he had decided to leave bequests to his native Boston and his adopted Philadelphia of 1,000 British pounds to each city on the condition that it be placed in a fund that would gather interest and support the public good for the succeeding 200 years.

A philanthropic approach is not only decidedly optimistic, it is the one form of funding that can be decidedly multigenerational.

PHILANTHROPIC APPLICATION: Systemic problems are not solved quickly and almost always require a long-term commitment, combined with a trial-and-error approach. Charitable trusts, Donor Advised Funds, and endowments are typically set up to support charitable causes for generations if not in perpetuity. In contrast, government funding from local, state, and federal agencies is typically assessed annually (or at least triennially) and requires a repeated approval process. Every time the political winds shift, government funding for many essential programs is on the chopping block.

3. Philanthropy is uniquely innovative. Two years ago, we worked with a gentleman on an estate plan that created an extraordinarily large gift. As a major donor to a hospital foundation, the donor was acutely aware that one of the major challenges for regional hospitals is recruiting and retaining highly qualified doctors and nurses. There were far more opportunities for career development in big cities.

Strategic philanthropists are less likely to donate tactically to fix a single problem nor do they give emotionally to simply create a feel-good moment. It’s not that they’re uncaring or unwilling to respond to a particular need. Rather, their compassion and response to needs are expressed in large strategic gifts that focus on fixing systemic problems.

PHILANTHROPIC APPLICATION: Our client-organization’s donor will make a dramatic difference with a major gift to fund a continuing education facility used for advanced training of physicians with a simulation lab for doctors and nurses. In this case, the donor attacked a regional problem at the source. The facility is up and running and beginning to equip medical professionals to become experts in their respective specializations.

Generally speaking, local problems are best served by local leaders who innovate and adapt to the specific needs of the people they serve. Government-funded programs by law must treat every population segment and every locality the same way. Consequently, creativity, experimentation, and innovation are prohibited. Those innovative solutions are usually the result of a philanthropic approach.

The inflexible bureaucracy and restrictions on the use of government funding are often the source of mission paralysis. Adaptability is painfully slow if even at all possible. On the other hand, philanthropy can quickly adapt to situations on the ground (as nonprofit leaders say) “at the speed of need.”

4. Philanthropic approach to systemic problems often challenges the institutional status quo. A lot of money has been pumped into various social and educational programs over the last several decades. If, however, government-funded programs provided workable solutions to poorly performing schools, multi-generational poverty, drug addiction, or homelessness, the problems would have been solved long ago or at least showing a significant improvement. Instead, there is a negative feedback loop that has people trapped in those unfortunate situations. One problem feeds another problem that feeds another.

Government-funded programs by law must treat every population segment and every locality the same way. Consequently, creativity, experimentation, and innovation are prohibited.

One example: less than 5% of the world’s population lives in the United States. Yet, one out of every five prisoners in the world (20%) is incarcerated in the U.S.3 The prison population in the U.S. is greater than the number of prisoners in China and Russia combined. The Bureau of Prisons (BOP) happens to be one of the most politicized agencies of the federal bureaucracy. Candidates for public office compete to be the toughest on crime until it becomes so incomprehensibly draconian, candidates are put on the spot and forced to promise to make reform… which are quickly forgotten.

Prison Fellowship, the nation’s largest Christian nonprofit serving prisoners, former prisoners, and their families, was founded in 1976 by Charles Colson, a former aide to President Nixon who served seven months in federal prison for a Watergate-related crime. It’s worth noting that in the U.S. all felonies are considered crimes against the state (not against individuals). While judges have the prerogative to punish crimes by ordering some form of payment to injured parties, it rarely happens. The goal of our criminal justice system is almost always punitive.

The Faith & Justice Fellowship (a division of Prison Fellowship) is a leading advocate for criminal justice reform, advocating a just process, proportional punishment, and (most importantly) a chance to make amends. Instead of warehousing convicted felons and branding them with a mark that they will carry for the rest of their lives, restorative justice compels responsible parties to make up for their harms. This faith-based organization creates a pathway to restitution, redemption and reconciliation with the community.

PHILANTHROPIC APPLICATION: The programs of Prison Fellowship are highly effective and far too numerous to mention. No matter how successful, challenging the status quo with innovative nonprofit ideas is usually a surefire way to stir up opposition. But because the need is so great and the systemic problems are so quickly growing, Faith & Justice Fellowship advocates are making extraordinary impacts on one of the most pervasive problems in our country. Christian initiatives are not always welcome in places that house hardcore criminals. However, Prison Fellowship’s program and message have inspired personal transformations in ways that generic 12-Step programs have not. It’s a mission that could only exist as a philanthropic initiative.

WHAT THE BEST ORGANIZATIONAL FUNDRAISERS DO
It’s hard for professional fundraisers not to think about their donors in terms of their donations. I can assure you, however, that donors rarely see themselves in that context. They usually think of themselves as husbands and wives, parents or grandparents, Little League coaches, investors, businessmen, hunters, fishermen, season-ticket holders, or club members. For most donors, giving is an afterthought. It’s not that they are stingy or self-absorbed, but giving is the one thing on their long list of financial, family, and vocational concerns that they have no obligation to attend to. Consequently, you cannot expect all donors to be innovators, multigenerational thinkers, or strategic philanthropists.

Donors usually think of themselves as husbands and wives, parents or grandparents, Little League coaches, investors, businessmen, hunters, fishermen, season-ticket holders, or club members. For most donors, giving is an afterthought.

Nonprofit leaders cannot wait for major donors to formulate a strategic giving plan. The leaders must cast vision, inspire donors with a dream, and convince them that all things are possible. They need to paint a picture of the preferred future that is so detailed, so effective, and so enticing that it captures donors’ imagination and keeps them up at night thinking about it. Fundraisers need to take the initiative to plant and cultivate the seed of multigenerational, innovative, and strategic philanthropy.