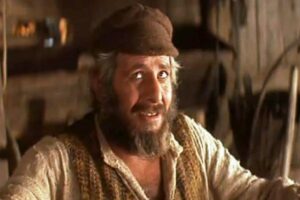 Tevye, the blacksmith in Fiddler on the Roof, dreamed about being a wealthy man.

“Oh, Lord, you made many, many poor people.
I realize, of course, it’s no shame to be poor,
But it’s no great honor either!
So, what would have been so terrible if I had a small fortune?”

Like Tevye, many have dreamed about having millions of dollars, not just to spend on themselves but to give freely to charity. I suspect that more than a few fundraisers have fantasized about being on the other side of major-gift presentations. I know I have. As wealthy individuals, we would envision ourselves as methodical, strategic, and passionate philanthropists who not only give generously but limit our lifestyles in order to become “instrumental accumulators of wealth”—that is, making money for the express purpose of supporting great causes.

It’s a compelling and well-intended dream. Having more money to give creates its own set of complexities and issues. As assets and giving capacity greatly increase, so do the funding appeals and the acute awareness of our ability to help. Among the barrage of increasing solicitations, many do not match donors’ values, giving priorities, or sense of stewardship—that is, helping where they’ve been “called” to help. It’s not easy to say “No” when it would be much easier to default to “Yes.” However, that’s what high-net-worth donors have to do—become very good at saying “No,” lest giving commitments get out of hand. Carefully vetting and evaluating funding requests can quickly become a second job. For the less methodical donors, a hap-hazard approach begs the question: has the fruit of their increasing philanthropy become like an overgrown and untended garden? Eventually, the heavy burden of stewardship replaces the joy of giving generously. This may be one reason why some family members at family foundations lose interest so quickly in charitable giving.

It’s a compelling and well-intended dream. However, managing generosity is not as easy as most think.

By virtue of their increased giving capacity, they are eventually overwhelmed with giving commitments and requests. With that in mind, donors at all levels need to periodically step back, press the reset button, and evaluate their giving. Many intentional donors do this annually as a philanthropic budget review for the coming one to three years. That’s why year-end giving was never as important to me as donor commitments for the next 12 months. Much better to make giving proposals for the new year rather than appealing for the Christmas leftovers from donors’ disposable income. That process enabled me on a number of occasions to actually participate in donors’ review processes. See Fundraising for Your First Quarter.

GIVING MUCH AND/OR GIVING WELL

Over the years I’ve come across many ways of measuring the quality of one’s giving. The models are usually in hierarchy form representing philanthropic motivations, frequently expressed as ladders, levels, and/or stages of generosity. However, our philanthropic motivations and emotions are not so simple that they can be seriously evaluated with a one-dimensional model—that is, generosity that graduates to a next level. While generosity describes the quantity and self-sacrifice of our philanthropy—HOW MUCH we give—there are several other equally important dimensions that relate to HOW WELL we give. Below is a matrix to evaluate giving commitments.

There are numerous examples of very efficient givers who, in terms of dollars, maximize their giving potential but with no real passion for their philanthropy. Generous giving provides an entrée into an elite society of donors. In terms of the chart below, they are in the top left quadrant—very planned, very tax-efficient, and very transactional. It’s not that they are unconcerned for the organizational cause, but the motives are mixed. In such cases, charitable contributions can become mere financial transactions driven only by tax deductions, business exposure, and social rewards—all apart from any personal passion for the cause itself. However, passionless giving is more a reflection on donor relationships and the passion fund-development executives bring to the relationship.

There’s more to philanthropy than charitable trusts, asset replacements, and tax deductions. The profession is not just making the case for funding; it’s imparting the passion and enthusiasm for the cause. We reap what we sow.

In the opposite quadrant (bottom right) would be the person who gives a small fortune but in ways that do not take advantage of the many gift-planning strategies—very inefficient but highly passionate. They give consistently with little concern or fanfare, recognition or acknowledgement. Their generosity is motivated purely by compassion for others or the simple love for a cause.

While generosity describes the quantity and self-sacrifice of our philanthropy—HOW MUCH we give—there are several other equally important dimensions that relate to HOW WELL we give.

Passionate giving is contagious, and the best way to catch it is by coming in contact with people and organizations that are engaged in worthy causes and are having a significant impact. Conversely, that same passion to give subsides with isolation from real people meeting real needs.

Regardless of the passion or efficiency of philanthropy, there is a third dimension of giving—HOW EFFECTIVELY donations are put to work. We all know that giving money indiscriminately to our kids does not necessarily do them good or make them better people. In the same way, giving indiscriminately to charity can also have a “less-than-optimum” effect.

Most effective philanthropic giving, whether current or future gifts, is in essence “planned giving.” That is, they tend to give proactively according to a set of purposes and parameters rather than reactively in response to urgent appeals. They look for organizations or aspects of a particular organization where targeted funding can have a strategic impact. They look for ways to use capital investments to elevate an organization to a higher and sustainable plateau of service. Strategic donors do not make gifts-they make investments in people just as they make every other investment.

The foremost question pertaining to a donor’s philanthropic audit is about purpose and values. Thompson & Associates estate plans begin with thorough discussions about what donors want to accomplish with (in many instances) the largest financial transfer they will ever make. There are a lot of discussions about who, what, how much, and why. The answers are not that simple because even after a lifetime of giving, there are still unresolved priorities. Occasionally, the honest evaluations reveal long-term giving commitments to institutions and causes that are in part or wholly conflicting with the donors’ values. This happens for several reasons:

After all is said and done, the only thing we can control is our stewardship; did we do what we were supposed to have done with what we were given? There are times in life, perhaps in everyone’s life, when we are faced with giving opportunities that do not rate well in any of the above categories. A request for funds that doesn’t seem to be an efficient, strategic, or even meaningful use of giving dollars. It could be an upgraded diagnostic capability at a children’s hospital and yet you may see many other pressing needs. Maybe it is simply a handout to a person on the street that might be spent on liquor. Perhaps it is a person who is not as needy as they pretend. Nonetheless, you have a feeling in your gut that you are supposed to help, or because you sense the still small voice in your head or heart.

After all is said and done, the only thing we can control is our stewardship; did we do what we were supposed to have done with what we were given?

A story from the Gospel of Mark, chapter 14, illustrates my point. A woman broke an alabaster bottle of perfume and poured it over the head of Jesus. Because it was a very expensive gesture, the followers of Jesus complained that it had been a waste—an inefficient and ineffective gift. But the Master stopped his disciples’ complaining and said what the woman had done would be spoken of in her memory wherever Christianity spread because she was actually anointing him for his burial. Shortly afterward he was betrayed and crucified.

Our determination to be faithful stewards in our giving has to be tempered with the idea of simply doing what we are uniquely supposed to do. When you follow those little unexplainable giving impulses, you never know what they will eventually accomplish or how meaningful they will turn out to be.

THE EXAMPLES ABOVE ILLUSTRATE the dynamics of wise stewardship—giving that is passionate, efficient, effective, meaningful, and ultimately spiritual. People tend to manage their generosity by one or more of these dynamics. The fine art of philanthropy is the process of incorporating them all.