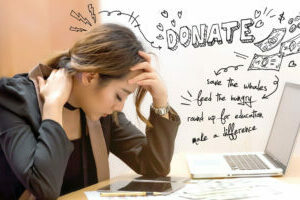 In my many discussions with fundraisers over the last nine months, one of the most frequent comments has been: “We’re so weary of talking about the Covid-19 pandemic and its ongoing impact on charitable giving.” That underlying anxiety (spoken or not) is magnified not only by the resurgence of positive tests and hospitalizations but by the uncertainty of when (if ever) things will return to a normal fundraising environment.

Among the best fundraisers, it’s not so much related to job security but to the constant frustration about their inability to do the things that they know will help fund the organization. They are, of course, concerned about their own financial security for their families, but not far behind is their passion for the institutional mission. Most fundraisers are mission-oriented, championing the cause of those in need.

The good news is that in my conversations with major donors, generally speaking, donor fatigue is far less prevalent than the corresponding fundraiser fatigue. There may be some who are hesitant to charitable giving, but the vast majority are as enthusiastic as ever about the organizations they have traditionally supported. In fact, estate-planning conversations with major donors show even greater interest in planned giving.

The good news is that in my conversations with major donors, generally speaking, donor fatigue is far less prevalent than the corresponding fundraiser fatigue.

Development professionals are on the front lines, standing in the gap for the needs of people in our communities. I’d like to encourage those who have chosen the noble occupation of fundraising with the thoughts that follow.

NOBLE OCCUPATION
The Ingenious Gentleman Don Quixote of La Mancha by Miguel de Cervantes Saavedra was published in 1606. The Spanish classic follows the adventures of a nobleman who (under the assumed name, Don Quixote) set out to revive chivalry, bring justice to the oppressed, and right the many wrongs of his day. In the story, people typically made fun of Saavedra’s fictional hero because he didn’t see the world as they saw it. Don Quixote perceived himself as a man on a mission, a knightly quest to become the champion and defender of all who were in need.

The most effective nonprofit leaders I’ve known are those who have been able to maintain a kind of romanticized ideal about their occupation. That’s not always easy to do. Many at-risk kids are overcome by their risk factors, and the dreams of promising students don’t always come true. Contending with unrelenting needs as well as the occasional setbacks over time can wear down one’s enthusiasm. Nonetheless, the best fundraisers somehow find ways to remain optimistic and idealistic. In other words, the best fundraisers have a little bit of Don Quixote in them. 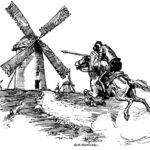 One of our associates told me about a similar individual—a chaplain at a juvenile correctional institution where he once worked. The chaplain was one of those irrepressibly optimistic leaders. In contrast, many of the institutional staff had grown cynical after a few years of working with kids with long criminal records and habits that were hard to break. Like Don Quixote’s critics, the correctional officers frequently made fun of the chaplain’s teary-eyed compassion and (what seemed to them) his irrational optimism.

I’ve known many great fundraisers over the years. Two from Iowa come to mind.

Charlie Becker founded Camp Courageous, an amazing summer camp near Monticello, Iowa, that serves special-needs children and adults. These individuals and their families face significant challenges every single day. Go on a tour with Charlie, and he would still tear up telling you about Camp Courageous. It was hard to resist his passion for the people he served. Charlie is now retired but as passionate as ever about the mission of Camp Courageous.

Don Ireland-Schunicht has been at the same children’s hospital in West Des Moines for 40 years. When he starts talking about what they do for patients, you get that same feeling. He’s on a life mission, championing the cause of kids facing serious medical issues. Don tears up sometimes also, but being a great fundraiser is not about tears. These two guys are much more than fundraisers. They’re fully engaged with their own noble causes.

The irony is that these men seem to be more focused on the mission than on the money, the result being that donors line up to give generously.

SELF-PERCEPTION AS A CAREER FUNDRAISER
Nonprofit executives (fundraisers in particular) are constantly making the case for their organization’s mission. If you do something enough, it’s hard to keep from becoming quite good at it. However, as a career fundraiser, the first and most important case is the one you make to yourself. Have you convinced yourself of the worthiness of your cause and career choice? Do you believe it’s important enough to put yourself out there in the role of a solicitor, constantly asking people for money? If you don’t make that case and win that argument with yourself (and win it convincingly), there will be a ceiling to how successful you can be in this line of work. That’s as true for seasoned veterans as it is for rookies.

It’s easy to feel good about yourself when your occupation is being validated by enthusiastic donors throwing money at you. However, somewhere buried in the recesses of your mind, there may be an unresolved issue. Deep down there lurks an image of yourself as a beggar on the street corner with cup in hand. It’s in hard times when that inner image begins to reveal itself—like when your ten best donors are unmoved by your latest appeal and show signs of losing their excitement for your organization. It’s in the face of those difficult situations that a weak case for the value of your occupation begins to surface. That’s when you have to fight the battle of self-perception. If that’s your situation, never give into becoming one of those task-oriented cynics like the chaplain’s critics at the juvenile correctional institution.

As a career fundraiser, the first and most important case is the one you make to yourself. Have you convinced yourself of the worthiness of your cause and career choice?

A GRADUAL PROCESS
If I believe in a cause and have properly cultivated the relationships, I have no hesitation about asking donors to give with extreme generosity. But that wasn’t always the case. At the beginning of my career, it was inconceivable to me that people would make the kind of donations that I now see regularly. With time and experience, my confidence grew, and I got much better at asking for money. However, a seminal moment in my own professional development came with the loss of our infant grandson and my own son’s subsequent challenge to me. See SOLICITING MEMORIALS: Understanding the Need to Give in the Wake of Tragedy.

The ordeal and aftermath resulted in a giant leap forward in my self-perception as a fundraiser. I no longer saw myself as simply working in the area of philanthropy, I WAS A PHILANTHROPIST (literally, “lover of mankind”). It wasn’t because I made a donation that put me in an elite category in the donor database. It was the result of a new life orientation—like the balance had suddenly shifted. I began to identify with the mission of that children’s hospital more than I did the process of raising money for them. My personal mission is very much a part of who I am and how I see myself.

Our self-perception as career fundraisers has a lot to do with our fundraising success. The next time someone asks what you do, you can answer as you always do, “I’m a fundraiser for XYZ nonprofit.” Or you can try this response: “I’m a philanthropist championing causes of people in great need.” I like the sound of that because it fits how I want to see myself as a fundraiser.

It’s hard but essential that you remain optimistic about the future. The best antidote for fundraiser fatigue is a renewed passion for the institutional mission and the people it serves, as well as a renewed belief that most donors are still onboard and enthusiastic about future giving commitments.