HISTORIC INFLATION: Strategies That Can Become a Bonanza for Nonprofits 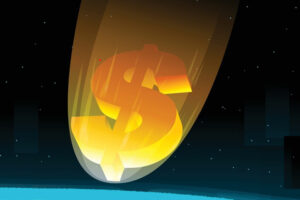 The data from the Consumer Price Index (CPI) confirms what we are all feeling—that the cost of food, goods, and services are currently rising at 7.5%. That’s only a one-month snapshot for January 2022, but that is consistent with a 10-month trend. The latest numbers for February 2022 show the rate inflation continuing to rise, now at 7.9%. Nonprofits typically get caught in the middle between rapidly rising institutional expenses and the reluctance of donors to make gifts from their discretionary income. This article is meant to serve as both a warning and an encouragement regarding three inescapable realities:

In the early 1970s (1974-1981), the inflation rate began to rise. It blew past our current rate of 7.5%, reached a monthly high of 14.8% in March 1980, and did not return to economically-safe territory until the beginning of 1983. In the decade from 1973 to 1982, the dollar lost over half its value. How significant was the impact on the cost of living? There had been periods following WWI and WWII in which the monthly inflation rate topped 23% and 19% respectively. However, the inflation rates of 1973 through 1982 were the longest and, therefore, the most severe since the creation of the U.S. Federal Reserve in 1914 and the standardization of tracking. A bag of goods and services that cost $1.00 in 1973 required $2.38 to purchase just ten years later (Inflation Calculator).

To underscore the intense challenges the university presidents were facing, earlier that year an article in a publication by the Council for the Advancement and Support of Education (CASE) estimated that half of the private universities would cease to exist. I heard one president after another tell how they were cutting staff, canceling planned expansions, and postponing maintenance. Some were leaving the grass unmowed in the summer. They were also losing some of their best faculty members because the colleges couldn’t raise tuition fast enough to maintain competitive salaries. The average donors to those universities were also hesitant about giving due to the impact of double-digit inflation.

The last presenter stood to address the other university presidents with a very different perspective. “Actually, our university is doing extremely well,” he confessed. “Our donors are becoming wealthier because of inflation. Our endowment is growing at a pace we’ve never seen before, and all of this is because of my development office.”

As he began to explain what his fund-development department had been doing, I leaned over to the professor who had been guiding my graduate study and said, “I want to write my dissertation on this topic.” Since, however, the experience of that 33rd presenter seemed too good to be true, it was considered to be a statistical outlier. The Chair of my committee said, “Eddie, that’s not a serious subject.” Nonetheless, my persistence eventually prevailed, and I began research for my dissertation by comparing 13 of the best university development departments in the U.S. The important thing to keep in mind is that the financial crises at universities and all other nonprofits during that period were driven by the “galloping inflation” that had begun in the late 1960s which had reached a high point by 1980, and was to continue through 1982.

EVOLVING INFLATIONARY CYCLES
The simplest way to understand the cause of inflation is in terms of the amount of money circulating in the economy. As the supply of dollars increases, the value of the dollar (i.e. purchasing power) of that dollar diminishes. So, it takes more dollars to purchase the same item.

Interest rates set by the Federal Reserve are one of the primary tools for combatting inflation. However, there are at least half a dozen other factors that contribute to the inflation rate—some of them psychological (fear of scarcity), many of them unavoidable (pandemics and natural disasters), and most of them political (unmanaged government spending). Another tool would be reducing debt. Unfortunately, the ratio of National Debt to the Gross Domestic Product (GDP) has been steadily growing since 1983 when it was about 20% of GDP and has radically accelerated since January 2021 and is now over 106% of GDP (see chart below). The point is not to make a political statement but to emphasize that Congress and the Federal Reserve have fewer options and tools to combat inflation. Consequently, it may be more severe and it may last longer.

An important thing to keep in mind is that there is no magic bullet that can produce immediate results. Inflation can escalate geometrically even with the Fed progressively raising interest rates. It’s also worth noting that raising interest rates rarely have an immediate impact. It usually takes at least a year and often many years to put the brakes on an overheated economy that is expanding too rapidly.

The Federal Reserve has indicated that we (in 2022) should expect a series of interest rate increases. This was what the Fed had been doing to bring inflation down to a manageable level throughout 1970 and 1980. However, progressive hikes in interest rates had little immediate effect on the inflation rate. The result was double-digit inflation and double-digit interest rates at the same time. Sheryl and I bought our first house in 1980 when the average inflation rate for that year was 13.5% and the mortgage rate was 19%, and that was with good credit. Interest rates do affect inflation, but other factors may become the primary drivers of inflation.

All that to say that the 7.5% inflation we are experiencing today is likely to be with us for a while, possibly years.

FOUR DISTINCT LEVELS OF INFLATION
So, what are the effects as the inflation rate increases? Below are four levels of inflation:

CREEPING INFLATION: As devasting as inflation can be to the cost of living for those on a limited fixed income, a measure of inflation is a good thing. A 2%-3% inflation rate is required for the economy to continue expanding. Recession is the term used to describe an economy that is no longer expanding. Depression refers to a radically shrinking economy in danger of total collapse. To put it another way: during extended inflationary periods, the rich get richer, and the poor get poorer. In a recession or a depression, everyone tends to lose.

While the Consumer Price Index (CPI) is the current average cost of a “basket” of goods and services, the Producer Price Index (PPI), which tracks the cost of producing goods and services, is a better predictor of prices for that same basket in the near future. PPI for January 2022 has increased to 10%. Consequently, you could reasonably expect the inflation rate to trend upward toward the PPI rate of 10% (Bureau of Labor Statistics – Producer Price Index).

The Scarcity Principle
A 10% inflation rate is harmful because the economy is expanding too rapidly. In an economy expanding at that rate, people begin buying because they’re afraid products will not be available in the future. The increased demand drives prices even higher. This is as true with houses and cars as it is with food and toilet paper.

I just talked to the owner of a car dealership who normally has about 250 new cars on his lot. That day he had 20. The fear of scarcity is a powerful motivator that compounds the demand side of the supply-and-demand equation. The demand for cars (new or used) is at a high point because consumers feel future prices will only be higher. The same is true in the housing market. There is fierce competition for available real estate and no shortage of people willing to pay greatly inflated prices because they expect prices to continue going up.

GALLOPING INFLATION: : That’s what we experienced in the eighties. When inflation is over 10%, money loses value so fast that employers are unable to keep up with the cost of doing business—rents, raw materials, and/or their employees. They find themselves in the same place as the university presidents, caught in the middle between rising business expenses, pricing customers out of the market, and providing for their employees.

HYPER-INFLATION: : You don’t see this very often. Typically, it is in the aftermath of a war or some worldwide calamity. The average inflation rate for the four years following WW1 was over 16% and for WWII just over 10%. 4 The Russian invasion of Ukraine has put financial markets in a free fall and threatens to increase energy dramatically. And no natural disaster in recent memory has had a greater impact on the U.S. economy than the Covid-19 pandemic, particularly in the deficit spending associated with it.

FUNDRAISING AND INFLATION
I raised an enormous amount of money during a period in which annual inflation rates were the highest since World War I. Here were a few of the keys to my university’s approach:

The first thing I had to realize was that in periods of galloping inflation (more than 10% APR), the relatively rich get richer and the relatively poor get poorer. When I refer to the “relatively rich,” that not only includes the extremely wealthy but the upper-middle class with little or no debt and with liquid assets to invest. In 1980, certificates of deposit (CD), the most conservative investments, were paying 16%-18% APR. With little debt and assets to invest, even with the most conservative investments, the rich were beating inflation by 10 percentage points each year. With significant debt and without assets to invest, both the poor and the middle class were simply victims of rising prices.

Secondly, even though many of our annual givers were hard-pressed to give, I knew (better said, “I hoped”) that galloping inflation would not last very long. Actually, I was wrong about that; it lasted for a decade. Nevertheless, it was important to stay in contact with those donors who had supported the university for many years.

Thirdly, the university I was working for enabled me to focus on gifts from appreciated assets. There is the temptation to go after gifts of immediate cash in tough times. However, there is far less incentive to make gifts of cash in the middle of an inflationary economy than from greatly appreciated assets. Put simply, the evaporation of discretionary income was followed closely by the evaporation of discretionary giving among the middle-class constituents.

Consequently, with that strategy in mind, I raised a boatload of money during the worst inflation since World War I by focusing my appeals on appreciated assets from the relatively wealthy with little debt.

THE WARNING
Many fundraisers already know this. However, the difficulty is often making institutional changes. These are uncharted waters for nonprofit leaders who find themselves in economic realities they have never previously encountered. The temptation is to simply stay the course and work harder with the strategies that have been successful in the past. However, for nonprofit institutions, it will not be a matter of simply working harder. Those institutions that survive and thrive in a long and intense inflationary period will work smarter by shifting their focus to soliciting appreciated assets in addition to cash. In doing so, they tack in a direction that takes advantage of the prevailing winds. Otherwise, many will find their organizational ships dead in the water.