Zen and the art of fundraising

A podcast with Alex Brovey on her practical trilogy 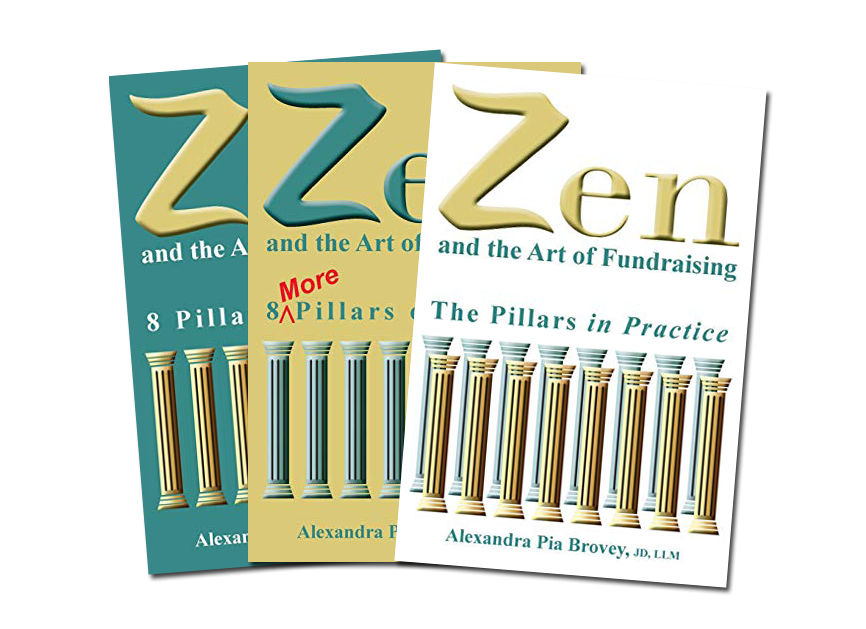 You likely recognize this popular book trilogy by none other than Alex Brovey titled Zen and the Art of Fundraising.  But, when was the last time you read it and have you read all three in the series?

Eddie Thompson, our Founder and CEO, sits down with Alex to discuss what compelled her to write the first book, which quickly grew into a trilogy, and how this practical series can empower fundraisers to be successful.

“These are tried and true things because they’ve made me successful so far in 21 years of fundraising.” – Alex Brovey

Her first two books cover 16 pillars for fundraising success, starting with “being in the moment.”  The third book shares how to apply the pillars of success in practical fundraising scenarios.

In this short 7-minute podcast, Alex shares several pillars of success and the concept of learning from “inverse mentors.”  Listen in for a sneak peek of these valuable resources and learn a tip or two to put into practice today! 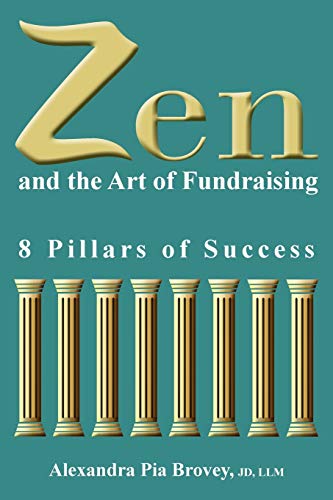 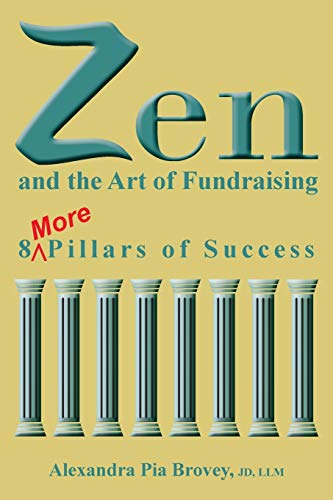 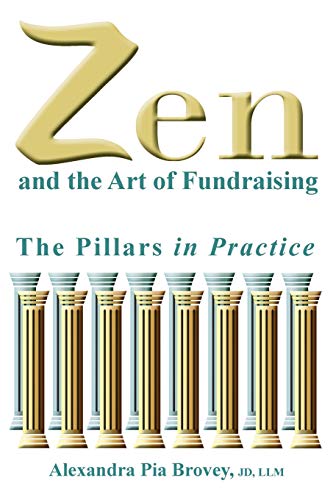 Note we are not affiliated with these books in any way.  Nor do we receive anything in return for going through the provided purchase links. We just whole-heartedly believe in these resources! 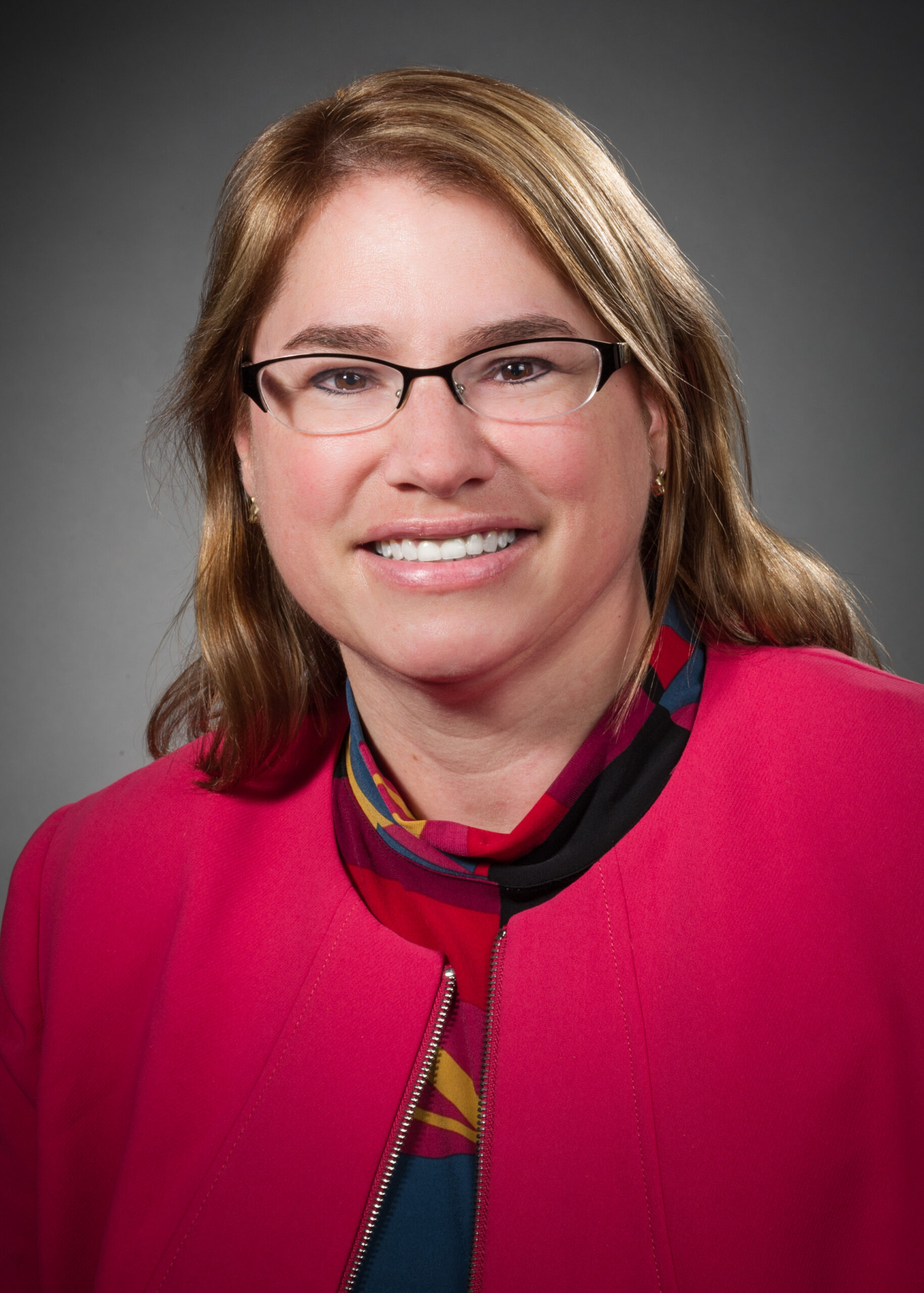 About Alexandra Pia Brovey, J.D., LL.M.  Alex is a leader and experienced charitable gift planner with more than two decades of experience at complex educational and health care nonprofits.

Currently, Alex is the Senior Director, Gift Planning at Northwell Health Foundation in New Hyde Park, New York, where she has worked since September 2008. Alex previously worked at the Pennsylvania State University, Pace University and Stony Brook University during comprehensive campaigns. Earlier in her career she focused on estate planning and administration as a member of the Delaware, Pennsylvania and New York bars.

Alex is a President Emeritus and mentor of the Philanthropic Planning Group of Greater New York in New York City. Alex is a past Board member and Treasurer of the National Association of Charitable Gift Planners, and served a 2-year term as Chair of its Leadership Institute. She is a frequent lecturer across the United States on topics related to charitable giving, and has had articles published in several national publications.

Transcript Conversation with Alex Brovey on Her Latest Book

Eddie Thompson:  Thank you for joining us on the podcast today!  We have Alex Brovey with us.  Alex has written three fascinating books and I’ve asked her to take time to share with us her latest book.

Alex, thank you for joining us!  Tell us the title of your book and maybe cover some chapters.

Alex Brovey:  Sure, Eddie, it’s my pleasure.  Hello everyone.  I had an idea a couple of years ago – it came to me that we always want to focus as fundraisers on what makes us successful, and there are lots of books out there on being successful.  For those who are gift planners, we know that there’s also some technical expertise; there’s an element of that in there, too.  But what I realized is before we get to the technical level, so we can just exist to be a fundraiser, we need to have some skills that really help make us successful.  These are tried and true things because they’ve made me successful so far in 21 years of fundraising.

So as Eddie said, I wrote a trilogy of books (that was not my intent to write three books, by the way!).  I intended to just write one and as I wrote one, it was about 8 Pillars of Success.  I was halfway through that and I thought there are a couple more pillars of success.  So, I wrote a second book and that’s called Zen and The Art of Fundraising: 8 More Pillars of Success.

I should share a couple of the pillars with you.  What do I mean by pillars?  The very first one sometimes is even hard to get past – it’s hard to get past the first one to the other 15, I’ve heard.  The first one is being in the moment.  And being in the moment means it’s the most important pillar, that’s why it’s the first one.  But until you are in the moment, at that critical time, the time that you’re about to be with the donor, whether it’s on a Zoom call these days or on the phone, or preferably the best way which is in person.  You need to really be there; not just give it lip service, but you need to be at the moment with that person.  To the point where I’ve heard other fundraisers describe it as the rest of the world tuned out and it was just you and the donor having that conversation.

There are a couple more that I talk about: listening, compassion, curiosity, those are the first four.  Listening is a really important skill for being successful, because if you’re not hearing what the other person is saying, how can you respond to that?  Listening is also really hard.  Listening is active.  People think listening is a very passive thing – you just sit back and listen.  But, when you’re listening, your mind is actually functioning.

Think of those old days, for some of the old-time fundraisers listening, when you went out somewhere on a trip and you might have visited with three, or four, or five individuals or couples in a day, at the end of the day you probably didn’t even want to speak anymore and you probably couldn’t even remember your own name.  And, why is that?  Because you really exercised your mind listening.  And, that takes an awful lot of energy, if you do it right.

So, those are some of the pillars.  There are 16 pillars of success – those are described in books 1 and 2.  Then what I realized is I was challenged by a colleague to really find a way to draw these out.  “These pillars are great, Alex, but can you give me examples of how this can help you be successful?”  I responded to that, and I said, sure.  That’s what book number three in my trilogy is all about. This book is entitled Zen and the Art of Fundraising: The Pillars in Practice.

All of these books are available on Amazon or are at your favorite bookseller online.  This particular book really focuses on how we apply these pillars to everyday scenarios that fundraisers find themselves in – whether it’s a blended gift, whether it’s trying to figure out how to broach a subject, whether it’s dealing with a frustrated donor, I even talked about how to work well with your colleagues and how these pillars can help you be successful.  I end the book with a focus on a term I made up called an inverse mentor, on how to deal with inverse mentors.

But, an inverse mentor is that person who you learned from, just like you learned from your mistakes, you learn from inverse mentors by not doing what they do, and not following their lead because in your heart of hearts based on your experience that they’re not helping you, they’re not after your best interests.  When you watch them do something and goof up, learn from that, don’t be the one who has to make the mistake.  Watch what someone else does and learn from that.

Eddie:  You know, Alex, this is interesting that you’re bringing this up. I met with a young man yesterday and suggested to him that the most important lessons I have learned are things not to do, and that I always kept a file of people who have been my supervisor or peer who made mistakes, and I’d write those mistakes down so I could avoid them.  I think that is a brilliant strategy you just mentioned.

Alex:  I’ve never actually thought about writing them down, Eddie, but that’s not a bad idea.  Look at it this way, there’s probably an unlimited number of mistakes that can be made, right?  You don’t each have to make them all.  We can allow other people to make their mistakes.  Then, if they’re willing to share them, or are we see them, we can learn from them, too.

Eddie:  Cayce says all the time that we built a great company based on all of Eddie’s mistakes.  There’s a lot of truth to that because I’ve made a lot of them in my 40, going on 44 years.

Well, I hope that people will buy your book because it’s insightful and its practical, Alex.  It’s practical and something you can learn and apply.  Tell us one more time the name of the book and where they can get it.

I’m still learning.  I re-read my books once in a while and remind myself of why these pillars are so important, and how they can help me be more successful.

Eddie:  Alex, you’re a great professional!  Thanks for taking time to do this.  We encourage people to read your books.  Alex, thank you for sharing with us, I really genuinely appreciate it.

Alex:  Eddie, thanks so much for the opportunity.