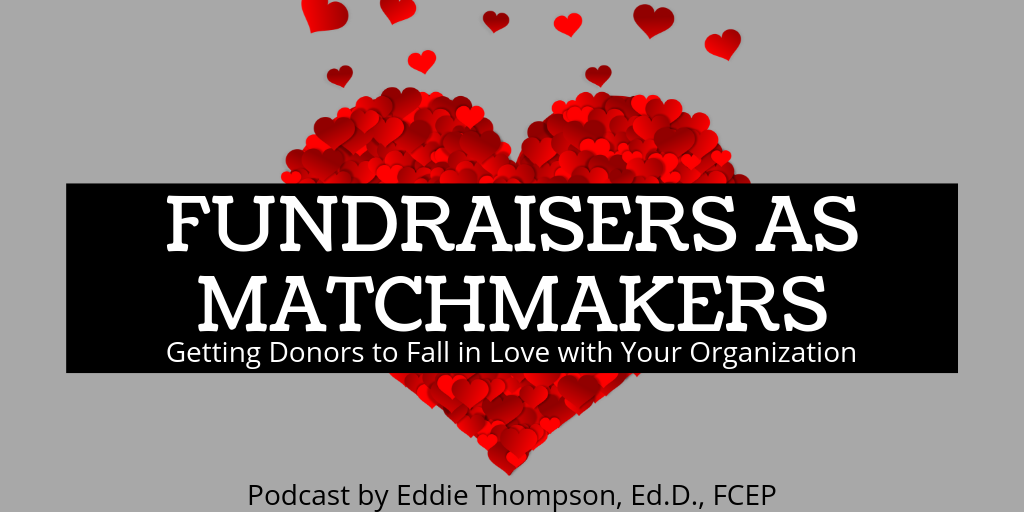 In this podcast, Founder and CEO Eddie Thompson shares 6 reasons why individuals fall in love with an organization, leaving them an estate gift.  Eddie shares ways to cultivate your donor relationships, making a “match” much more likely among your supporters.

Thank you for joining us!

Today we talk about the topic, which is really important, getting donors to fall in love with your organization.  The title I would have for it is fundraisers as matchmakers.

It’s really interesting that being a fundraiser is a lot like being a professional matchmaker.  You’re introducing eligible people to your organization – pointing out all the best qualities and hoping potential donors will fall in love with your organization and become a lifelong member of the organization.  The thought is if you can win their hearts and minds to the cause, then the money will follow.  And, it’s true.  But, how do fundraisers get individuals to fall in love with their organization to the point that they’re willing to make an estate gift?  That’s a really important question!

I’ve worked on thousands of organizations’ donors who have left the organization a planned gift.  It’s been interesting.  I’ve learned a lot of really important lessons – some of my biggest mistakes, to be honest with you.  I have learned some things that have really made a difference in the way that I approach donors.

While I don’t always know what the donor wants to do initially, I let them tell me by asking important questions.  What I’ve come to realize is there’s basically six reasons why donors fall in love with the organization so much so that they’re willing to leave an estate gift.

Passion and dedication for an organization is often the result of an intense life experience – something happened that changed their life.  It’s the most common reason that I find donors make extraordinary gifts to organizations.  Maybe it’s the medical care someone got for a child or a grandchild that was sick.  Or, a mentor that approached them at an important time of their life when they’re making really important decisions.  Or, it could be a simple scholarship that led to a career change, and excellence and security.

On the first day of our estate planning interviews, I often ask donors what’s the most poignant or most life-shaping experience?  It’s often in the second meeting when we discuss what they want to accomplish with their estate that they begin to explain why they love this particular organization or cause.  As you can guess, almost always there is a straight line between the most intense life experience in a donor’s charitable intention.

So, passion and dedication is often the result of an intense life experience.  But, then there’s a number two I’d like to point out which is also very common.

I think of one particular example – it’s really an extreme example, I confess upfront.  But it really does a great job of painting this picture of how a donor’s passion is often associative. It is probably the most unusual planned gift I’ve ever worked on.  This couple had lost a grandchild.  In the aftermath, there was bitterness; real bitterness towards the doctor and anger at the hospital, and even the threat of a malpractice lawsuit.  Through it all, though, the chief executive officer of the hospital was gracious and understanding.  And, they respected him because of that.  In fact, it only deepened as time went on.  So much so that they left in their estate a substantial bequest for the hospital.

I was astonished to hear this couple tell the story.  It’s perhaps the best example I’ve seen of people enduring love for an organization because of their affection and respect for just one individual.  They love that CEO!  And, even though they were unhappy with the end result, they continue to love him, and ultimately made an estate gift of the organization.

The third reason, which you see on occasions, is that individuals are simply drawn by an incredible standard of excellence.  I worked with a gentleman and his estate plan that contains an extraordinary gift for MD Anderson Cancer Center.  Like most strategic donors, his approach to business and philanthropy is deliberate.  It’s cautious.  And, he is somewhat skeptical.  You might also say the guy is a little bit cranky, with high expectations of himself and everybody else around him.  He stated to me that the reason he was giving to MD Anderson is not because they made personal visits.  In fact, it’s really interesting.  He didn’t know anyone on the fundraising staff.  But here’s what he told me, “They’re so well organized.  They think of everything.  There’s no wasted time.  When you walk in the door, they know exactly what you’re supposed to do and they have someone there to help you.  You’re not left out there by yourself.”

It’s hard to think of this guy who is somewhat cranky in romantic terms.  But he has fallen in love with MD Anderson Cancer Center by the way it is run.  It just really impressed him.

The fourth reason individuals give is because they are attracted to the organization’s innovation.  There’s a lot of generational wealth coming from successful business leaders who spent their whole career in innovating their business.  They see themselves as innovators and they look for that same characteristic in nonprofits.  These folks are often hyper agents.  They’re wealthy individuals who are generous, confident and determined to change the world.  They’re also short on patience with organizations’ resistance to change. Their relationship with a not-for-profit are often short-lived and gifts are often current gifts rather than planned gifts.

I remember working with a donor few years ago who is a prime example of this type of person.  He loved his wife, who ultimately died from cancer.  He was so driven by that and his hatred for cancer that he wanted to start a Cancer Center.  But the hospital simply could not find it feasible.  He took his fifty million dollars to another charity.  So, innovation is important and attracts a certain number of individuals.

And, two final points. Other donors at some point in time become infatuated with an idea.  They really have no personal experience tied to it.  Neither, had they been personally impacted by the needs of an organization and the cure they’re seeking to find – whatever that might be.  However, they’re intrigued by the cause.

The best example are causes that have gone viral through social media.  Multitudes fall in love with this great idea because it’s a very cool and trendy thing to do.  There’s a lot of people giving to this trendy cause.  Because they want to join the bandwagon, they join the bandwagon.  The challenge is they often jump off the bandwagon as quickly as they jumped on.  So, consequently you seldom see a planned gift designated for this type of organization that is maintained primarily by social media or direct mail.

Then, the last reason people give is because they become infatuated with your personal branding.  It’s a lot like wearing a designer shirt or wearing a logo or polo player or the alligator of the sailboat.  In other words, affiliation with the organization becomes one aspect of their personal branding.  The purpose of recruiting or hiring a high-profile salesperson is to demonstrate how cool a supporter is in working with this cause.

What are the takeaways for fundraisers?  The further you go down the list with donors of the six I’ve just given you, the less likely they’ll make a planned gift.

Some donors and organizations seem to be a perfect match – they just seem to work well together.  However, it’s hard to tell early on who’s going to fall in love with your organization.  Who’s just simply infatuated for just a short period of time?  Or, who’s going to have a lifelong love affair?  The only way to really approach this is to cultivate donors, to spend time with them and understand their passions in life.

Thank you for joining us on this podcast!  We wish you the very best.

Let's Talk
The craziest thing that can happen is nothing.