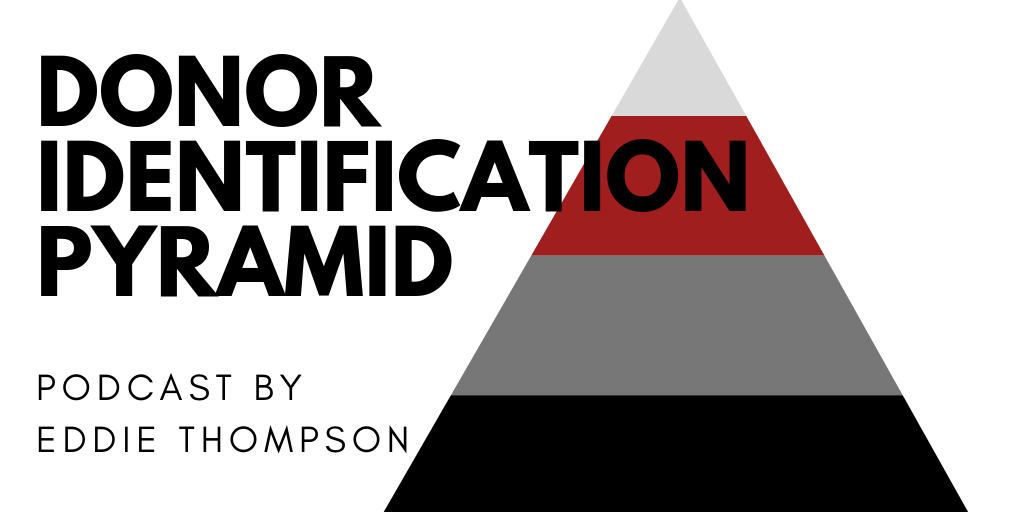 We’re all used to seeing pyramid charts in terms of identifying donors.  This visualization helps prioritize moving individuals from the broader bottom level to the higher level of involvement.

In this episode, Founder and CEO Eddie Thompson proposes a new pyramid corresponding to an individual’s affinity to your organization and how developing passion for your mission leads to greater financial support for your organization.

Today’s topic is identifying donors – moving them from friends to followers to raving fans, like an identification pyramid.

Fundraising executives spend a lot of time looking at pyramids.  We’ve done this for years, haven’t we?  The planning charts help us prioritize our fundraising goals and keep us focused on relationships that are really the most important to our organization.

All pyramids have strata, levels that categorize people, increasingly smaller but more significant groups.  The goal is to progressively move people up the pyramid to the highest level of potential involvement.  Prospects become first-time donors, then they become repeat donors, then they become regular donors, and so on.  You might see a direct mail response, personal visits, with a systematic gift, major gift, or planned gift at the very top.

Every fundraising pyramid I’ve ever seen categorizes actual or potential donors by amounts, frequency or types of donors.  But, equally important for a long-term development strategy is the affinity that each donor feels for the organization.  That suggests we need a pyramid or a planning chart that categorizes people in terms of level and intensity of the relationship they have with the organization.

An established nonprofit leader may pay more attention to the dynamics of the 21st century grassroots philanthropy – sometimes it’s fundamentally different than what we’ve seen in the past.  One good example is what you’re seeing today, especially on the internet, when individuals who are really involved in a responsibility movement or a social movement, are building their organizations by creating friends, followers, as well as asking people to like them, or join their group, or forward their message.  They’ve really taken connection to a whole new level that we’ve not seen in the past.  Irrespective of established fundraisers’ preference, or lack of it, social media tools have really made a difference in our organizations’ future.  We have to pay attention to the dynamics of the 21st century grassroots movement when it comes to philosophy of our approach to donors.

When you think about it, it really does make sense to prioritize people based upon their relationship to the organization.  We’ve acknowledged that deepening donor relationships are important and it must be planned and driven by specific activities.  Truthfully, moving donors up the typical donation pyramid is often easier than moving them up the identification pyramid.  You might have levels like casual fan, raving fan, elite booster, and spokesman.

Level 1 – Casual Fans. You could compare this to colleges and their fan base. You might have level one, which is a casual fan.  They’re on the bottom of the pyramid.  They’re individuals who wish the team well.  They may occasionally watch the game or attend a game every so often.  Casual fans tend to jump on and jump off the bandwagon depending on how the team is doing.

Level 2 – Ravings Fans. Then, you have that level two which is the raving fans.  They’re passionate fans.  They have all the gear, they fly the flags on their home, they decorate their homes in team colors, they tailgate, they paint their face, they do all kinds of unusual things, maybe even plan a wedding around the game schedule.  Those ravings fans are engaged.

Level 3 – Elite Boosters. But, then you might have that booster.  This is level 3, these folks are a little bit different.  They are individuals who may not look like raving fans, but they are, they deeply identify with the team.  They’re an elite fraternity of supporters who feel a sense of responsibility, in fact, feel some sense of leadership for the team and ownership in the program.  They give generously.  For a nonprofit, they raise money for programs, they recruit other boosters into a club.  The program is where it is largely because of their involvement.  Those are boosters, people who are engaged who really help support the organization.

Level 4 – Spokesperson. Then you have that special level, level 4.  These are independent spokespeople.  They glow with pride when they talk about your organization.  Only a few organizations are really able to elevate donors to this level, where these individuals become an independent spokesperson.  That would be a T. Boone Pickens for Oklahoma State University’s athletic program.  Or, what Jerry Lewis was to Muscular Dystrophy Foundation.  Or, what Danny Thomas, now Marlo Thomas, are to St. Jude’s Children Research Hospital.  These are major donors who became fully identified with the organization.  In fact, the MD Foundation even refers to their young patients as Jerry’s Kids.

If we measure people only in terms of donations, or potential donations, we really miss a tremendous opportunity.  We’ll also be far less likely to develop our skills in winning hearts and stirring up passions for causes if we don’t pay attention to their feelings about the organization.

As we say, if you don’t measure this and monitor it, you won’t improve it. Let’s start thinking about that identification pyramid.  Where do your donors fit on this pyramid?  What is their interest?  What is their passion level?  These, too, are important factors in securing larger gifts.

We partner with nonprofits to provide estate planning services to their supporters.

We help you build stronger relationships with your supporters to fulfill your mission. Our planning process helps you move from “hoping” planned gifts materialize to active gift creation by putting your supporters’ needs first. We give them an opportunity to work closely with an independent advisor to clarify their values and reduce uncertainty, freeing them to make a lasting impact on their family, community and the world.

It is our greatest honor to partner with nonprofits helping make great things happen by connecting passion and potential!

Get Started at Your Organization

Let’s Talk
The craziest thing that can happen is nothing.