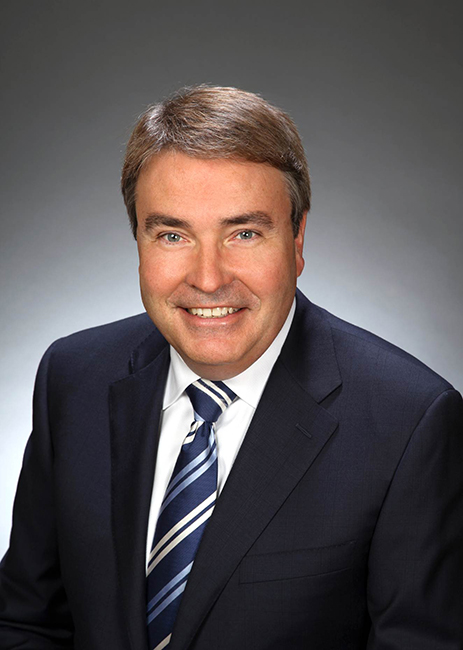 About Mark Larkin. Mr. Larkin serves as the President of Boca Raton Regional Hospital’s Foundation. In his role, Mr. Larkin is responsible for directing the organization’s fundraising and donor relationship efforts, including capital campaigns, special events, governance and other philanthropic initiatives. Under his leadership, Boca Raton Regional Hospital Foundation has reached historic philanthropic levels and has been named a Top Performer for efficiency and effectiveness in healthcare fundraising by the Association for Healthcare Philanthropy, a five thousand-member trade association for the United States and Canada.

Mr. Larkin joined Boca Regional after serving for 18 years at CentraCare Health in St. Cloud, Minnesota. There, he spent 12 years as Vice President for Philanthropy and Community Health Improvement, growing the six-hospital system’s fundraising and community health improvement work. Prior to his position with CentraCare, Mr. Larkin served in fundraising leadership roles with the United Way and the Boy Scouts of America in Minnesota.

Mr. Larkin is a graduate of the University of Iowa, a Certified Fund Raising Executive (CFRE) and a Board Member of the Association for Healthcare Philanthropy. He is also a past Board Member of Rotary and Exchange Service Clubs.

Eddie Thompson:  Thank you for joining us on our podcast today, Conversations with Industry Icons!  Today we have with us Mark Larkin who is the Foundation President for the Boca Raton Regional Hospital Foundation.

Mark, thank you for joining us.

Mark Larkin:  Oh, thank you, Eddie!  It’s a real pleasure to speak with you and to be a part of the podcast.

Eddie:  Mark has been someone that I have known 10 to 15 years, maybe even 20—you know how time gets away from us!  He has always been one of those individuals that I respected; I respect his professionalism.  In addition to his incredible skills, he is a really good man and has a really outstanding family.

Mark, we really appreciate you taking time to be with us.

I’m going to ask you two questions and I just want to hear you talk about your experience.  Number one, what lessons have you learned over your career that’s really, really made a difference?

Mark: That’s something that really gives you pause to think because there are so many things.  I’ve been involved in philanthropy now for 35 years, and in health care philanthropy for more than 20 years.

I started my career in annual giving with a number of different smaller not-for-profits, and I spent a big chunk of my career with the United Way.  What I really realized was that you can put the same amount of time and effort into annual giving or major giving, and have a much different outcome on how much money is raised for your organization.  The numbers to me don’t matter.  I don’t want to sit here and define what a major gift is because that’s really up to the individual charity and what they’re capable of doing and securing. A food shelf may not be able to generate the same level of major giving as a hospital or a higher education institution.  But you can get much greater levels of giving if you just change your focus a bit and really take the discipline to sit across the table from prospective donors, share your mission and story, and talk about really big dreams you have as an organization with them, understanding what their area of interest is.  It takes just as much time as it does to see several hundred people and ask them all for a big gift as it does to sit across from somebody who could make a single gift equal to all those hundreds of people that you’re talking to.  That, to me, was a major shift in my career and a focus point for me 20 years ago.

Eddie:  Mark, you raise a really good point!  One question I have is, what kind of strategy do you have in replacing those major gift donors?  Because attrition does take place.  Either they lose interest or maybe they feel like they’ve given enough to your organization or they pass away.  So, what activities do you go through to replenish that major gift list?

Mark:  This is different depending upon the not for-profit. In our case, we are a hospital organization; we’re serving our community.  Philanthropy is really making a difference in the amount of services we can provide and taking us from being a really good healthcare organization to a truly outstanding organization.  We focus on those individuals who have utilized our services and we talk to them.  We do not know why they are in or what is going on with them medically due to privacy laws, but I do know that they’ve used our services.  So, for our prospective donor base we look for those who hold well and those who have used our services.  The third component we look for is those who have demonstrated charitable intent, they’ve given to other causes.  If we’ve got those three components, they rise to the very top of our list.  Then, we begin the relationship with them and speaking with them.  If they don’t have one of those three criteria, they may still stay on our list but they’re not our most immediate people that we’re talking to.

Eddie: Excellent points, Mark!  The last question I want to ask, and I may be keeping you a little longer than I promised; but, what has been the one mistake that you would consider a big mistake in your career and what did you learn from it?

Mark:  This happens a lot.  I see it with board members and other volunteers who are new to fundraising activities that we do and the work that we do.

Most people think if we just plan it, if it’s a big event or we’re going to go solicit gifts, if we just promote it enough, it will happen and people will come. Things to me rarely happen organically.  If you look at any of the organizations, whether it’s health care, higher education, any other not-for-profits that are really successful in their fundraising, all of them have specific strategies and plans, and they implement them.  They are in front of people talking to them about that.

So, I would not just plan.  I have done this the wrong way, and it was embarrassing and a huge mistake.  Just planning on having a big gala or gathering (for example, a big gala ball) and hiring some well-known talent and just saying, “Oh, we’ll just put this out and everybody will show up.”  It doesn’t work that way.  You need to be talking to your best donors about supporting this top level and by the time your invitation hits, there needs to be several of the top sponsorships already sold, and names of those donors who purchased them.  Because then people say, “If they’re going to be at that event, then I’m going to be at that event.”

You just can’t let it happen and say we’re going to plan it and put out a few flyers and things and everything will come together.

The same way with a campaign.  There’s a reason why most organizations who run very successful, very large capital campaigns, don’t announce it to the community until they’re well on their way to their goal.  A lot of people say, “Oh, that’s passé, that’s old school.” I have not seen that.  We’re in the middle of a $250 million campaign.  We’ve raised more than $190 million toward that campaign.  We did not announce it to the community until we reached well over 50% of our total and had a list of key individuals in the community who were willing to lend their names, as well as making the lead gifts to our campaign.  All of those things made a real difference and gave us the momentum to move it forward.

I think that what I did, I did it with the best of them.  I made every mistake in the book. I thought we have such a great cause and we have such a great need that people will get that and they’re going to give. And I was left standing there by myself in most cases because we just didn’t take the time and the discipline to make all of those steps occur and happen appropriately.

I see it time and time again. I hear it continually still today from new board members or new members getting in who really haven’t had that experience. They say “Oh, let’s take an ad out in the paper and we’ll raise millions.” Or, “Let’s do a really cool commercial and then people will start giving.”  You need to understand your audience, your market, and really know how to get them excited about this.  It doesn’t just happen on its own.

Eddie:  You know, Mark, you’ve given us some great insight.  I really appreciate you taking the time today to join us on this podcast.  If you don’t know Mark, Mark is not just a skilled professional as I began, but a really good man, and he’s exemplified that today.  Mark, thank you so much.

Again, this has been Mark Larkin who’s been with us this morning.  He is the president of the Boca Raton Regional Hospital Foundation.

Mark:  Thank you, Eddie! I appreciate it and thank you so much for your leadership and your great podcast that you do.  I have always respected and admired you.  I think this is just one more way that you’re helping our entire industry think about critical things that relate to us and how we can do them better.  I’ve always appreciated that about you.  You’re always looking for ways to help keep our industry strong and all of us learn from one another.

Eddie:  I appreciate you.  You’ve been a good friend for a long time.  We look forward to being with you again on this podcast. Have a great day!