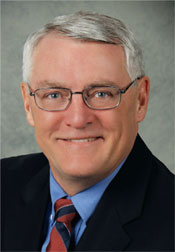 About Charles Shultz, JD, AEP®.  Charles is a California attorney who specializes in charitable giving and estate planning. He is President of Crescendo Interactive, Inc. and is the principal creator of the GiftLegacy Pro eMarketing System.  In addition, he is Editor for the GiftLaw Pro charitable tax service and the weekly GiftLegacy and GiftLaw eNewsletters.

Charles writes, speaks and publishes extensively. He teaches over 30 planned giving seminars per year and is President of GiftCollege.com, an Internet education program for gift planners and professional advisors.  He also serves as Executive Director of GiftAttorney.com, an association of attorneys with charitable receptivity.  His law degree is from the University of Michigan.  He is an Accredited Estate Planner (AEP®) and member of the National Association of Estate Planners & Councils’ Estate Planning Hall of Fame®.  Charles is on the Board of Directors for the Christian Foundation of America.

Eddie Thompson:  Thank you for joining us on our podcast today.  This is a podcast dedicated to icons in our industry.  We definitely have one today with Charles Schulz, who’s the President and CEO of Crescendo Interactive.

Charles, we really appreciate you taking time to be with us today.  I really wanted people to hear from you.

Charles Schultz:  Well, thank you.  Delighted to be here, Eddie!

Eddie:  The best way I can think of describing Charles is he’s a gentleman.  I respect him.  I respect his service to our country when he was in the Air Force, flying those fighter jets.  Where I came to know him was about 1984-1985, when I heard about this new company called Crescendo.  I visited with him on the phone, and we bought the product.  Charles, it just changed my career!  I will always be indebted to you for what you’ve done for our industry.  You truly are an icon.

You’ll hear from him today about some changes that he’s observed in his 30+ years, if not 40 years, of doing this.  So, Charles, again, thank you.

In the 3 or 4 decades you have worked in this industry, what have you seen as far as changes?

Charles:  Yes, Eddie, there have been changes.  Let me just mention one thing that has not changed, and two that have.

The one thing that has not changed is the option, or ability, of the development person to sit down with a donor and build the bond of trust.  That was true in 1980 when I started.  You had to sit down with those donors.  You had to build a bond of trust, work with them, and basically answer their questions.  That’s still the basic function today.

Now, of course, some of that’s being done right now on Zoom calls.  But, before too long, that will be done in person again.

So, I call that the lack of change, basically – the relationship between a development person and the donor.  That hasn’t changed.  But, two things have changed.

The donors now are much more empowered than they were before.  A gentleman named Warren Buffett was asked about the internet, and he said, “The Internet will power the consumer.”  And that’s true of our donor friends. The internet empowers donors.  They can go out.  They can research.  They can find out about all kinds of nonprofits.  They can find lots of different types of gift agreements.  All kinds of information out there that empowers the donors.

The third area, which again, is an area of change, is the development officers are empowered.  When I started, we basically had a stack of white paper, I had a black marker pen, and I drew little pictures.  The development staff, now, have software, and cell phones, and all the technology.

They also have the ability to do something that we could only dream about back at that time.  They can actually in 1 to 3 hours a week run a multichannel marketing program, a pretty respectable program that has 4 or 5, 6 different marketing components.  And so, the second change is, the development staff are really empowered.

Eddie:  So, true.  Have donors changed in your view?

Charles:  The donors themselves haven’t changed a great deal.  We had the different generations.  You had the builder generation, the greatest generation of World War II.  Most of the people that I actually worked with, personally, as I was doing development work, were of that generation.

What I’ve said to people is that, if you could get 2% bequests out of the boomer generation, that’s $1 trillion.  So, that’s certainly a possibility.  That’s something we want to keep in mind.

But then you have the next generation.  The big challenge that faces all of us is to persuade the young generation, the millennials, the Gen X folks, to join the ranks of philanthropy.

Eddie:  Boy, that is so true.  Do you think COVID-19 will have a lasting impact?

Charles:  The new normal is going to be different. We don’t know exactly what will happen.  In October of 2009, I spoke to the CGP conference and I said we’re going to change in 2010 from 90% print marketing and 10% electronic marketing.

By the end of 2020, I said we will be 90% electronic marketing, 10% print.  So, that’s a change.  Maybe we haven’t yet hit exactly those numbers, but we’re at least trending pretty close to that.

And there’s no question that we’ve probably seen 5 or 10% increase in the age 75 and above group using the internet.  In our e-marketing now in my seminars, I say that probably 75% of people 65 and above are now on the Internet.  We certainly are going to see much more e-marketing than in the past.  And, that trend was happening already, COVID-19 simply accelerated it.

Eddie:  You know, Charles, there’s a period of time for about two or three months where I had all of my meetings with donors virtually.  I found they were very adept at using it.  When you mentioned Zoom or GoToMeeting, people in their seventies, eighties, and early nineties, had no problem!  I guess they talk to their grandchildren on it.  But I think that’s exactly right, I hope we don’t lose that personal contact.  Virtual meetings, to some degree, will remain going forward.

Eddie:  How do you think 5G will change things?  Or, will it?

Charles:  5G is certainly going to accelerate all of the different electronic media.  5G is going to be used very widely.  We’ll have what’s called IOT, the internet of things, where you have all kinds of appliances in your home that are now connected to the Internet.  And, of course the speeds, I’m going to say realistic speeds, will probably be 4 to 7 times faster than your 4G.  Yes, that’s going to change a lot.

The other thing that’s happening now in the tech world, we’re starting to see the first folding phones.  Within probably three years, we’ll see pretty widespread use of the folding phone, which gives you twice the screen area.  So, the number of people using phones and surfing the Internet now has been going up by maybe one or 2% per year, at probably 16 or 18% overall.  Now, that will go probably to the high twenties maybe 30% of Internet surfing will be on the new phones once everybody gets the flip phones or the foldable phones, which doubles your screen size.

Eddie:  Wow, isn’t that something to think about!  Let me ask you one last question.  What is one mistake you’ve made professionally, and what have you learned from it?

Charles:  Ok, there was a doozy.  It was back in the early eighties, I had a partner, and he had a business, and he left and went to become the president of a large medical center foundation at Dallas, and I tried to run his business for two years.  His business was completely built around his skillset, not my skillset.  The worst thing anyone can do is to try to do something completely out of their gifted area.  It was a disaster, and it was painful.  So, what we want to do, of course, is everyone should be working in their area of strength, and that’s essential.  And so, I learned from that, don’t work outside your area of strength.  And shortly thereafter, we started Crescendo and of course, that’s built around some of my areas of strength.  Although, I’ve got a great team now that handles all kinds of different aspects of that work.

Eddie:  Well, you are truly an icon.  Charles, I personally appreciate you taking time to do this.  I said to Charles before we got on this podcast, he really made a difference in my career.  I remember getting GiftLaw, and all the things you did for me early on.  The times I would call you and ask for advice, you were very patient with me.  I give you an awful lot of credit along with three other people for making a huge difference in my career and my trajectory.  I’m trying to do what you have done for now just to give back.  That’s what I’m trying to do.  You’re an inspiration to me!

Charles:  Well, thank you so much Eddie!

Eddie:  We’ve had Charles Schulz with us, the CEO and President of Crescendo Interactive, a great icon.  Charles, we thank you for your time.  We hope everybody benefits from this incredible opportunity.