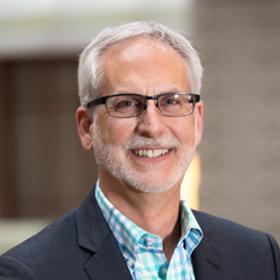 Eddie:  Thank you for joining us for this podcast!  We have a special guest with us, Michael Kenyon, who is the president and CEO of the National Association of Charitable Gift Planners (NACGP).

I don’t know how many of you know Michael, but he is a great professional and a great leader in the organization – we’re thankful that he’s leading us!

Michael, thank you for joining us!

Eddie:  So Michael, here come the hard questions!  What is a big mistake you’ve made in your career?  And, what have you learned from it?

Michael:  One of the mistakes that I make, not like a single event, but something that I always do is that I always think you need to be bold.  So many times when I look back at something that I’ve completed and even if it was a great success, when I go back and evaluate it, I always think it could have moved faster or it could have maybe had some stronger results if we had just been a little bit bolder and taken some more risk.

You can’t be crazy Kamikaze, but I think most great things happen when people take risks that other people just step away from or step back.  So, I think it’s that mistake of, how do I make sure that I don’t back away from something but I stay bold.

Eddie:  It’s interesting you say that.  I was talking to a team of solicitors yesterday.  They are soliciting a gift that’s going to be somewhere between fifty and a hundred million.  I know that’s a huge gap, but there’s a reason for that. I was coaching them on what’s the best approach for that type of thing.  The last thing I said to them is be bold.  Don’t be bashful.  Be thoughtful – bold doesn’t mean wild.  But, to be bold; and, I would agree with you, that’s been one of my challenges – especially early on in my career.  I was too timid.  Again, being bold again doesn’t mean you’re crazy or wild, but it means you stretch yourself and you stretch others in the process.

How’s that lesson impacted you day to day of being bold?

Michael:  I try to keep myself from looking at something as its presented.  Sometimes we get lost in our own culture.  Whether that’s an organization or at home or whatever else we’re doing, we kind of get lost in all of the information that we see and we tend to interpret it as its presented to us.  I always try and take that filter off and just say what if this is just completely new information like a foreign language that I had never known anything about, how would I address the problem that way rather than always trying to be incremental.

I think that ties into that boldness, too, because you can be more bold.  That’s not being brash and that’s not throwing away your context or your history because that’s all important.  But, it’s trying to say, okay now when I put that together, how can I take that filter off and look at that in a new way? That’s something that I have to do every day when I look at things, I think that’s where creativity comes in.

Eddie:  Do you think it’s harder for individuals to be bold or organizations to be bold?

Michael:  I think it’s harder to develop a bold culture within an organization.  That takes time and that’s hard.

Eddie:  It takes individuals who are bold to lead the effort for an organization to be bold.  It’s hard to get everybody on the same page for that, isn’t it?

Michael:  It’s hard to get that enthusiasm, right?  Because with boldness, like what you’re saying, it’s not being wild.  It’s not being brash. It’s not being unthoughtful.  But, there’s an enthusiasm when you start to feel bold – that’s contagious.

Eddie:  I remember really early on in my career that I was so afraid of making a mistake.  I was more timid because I made a lot of mistakes!  I became more and more cautious.  But, what I’ve learned over the years in observing people who are really successful. There are calculated risk takers.  Taking any risk is bold, but it doesn’t mean that you don’t calculate first.  Boldness needs a strategy – it just can’t be done on the fly.

Eddie:  What lessons did you learn on occasions that you haven’t been bold?  And, what’s its current impact on you?

Michael:  It’s the missed opportunity and the lost time are the factors when you’re not bold enough.  I’ve certainly had experiences of that.  When I look at CGP, not to get too deep into that, but there was a pretty strong interest coming out of the recession we didn’t know where the organization was going.  We wanted to be open but on the other hand it was very clear that they didn’t want to do anything brash.  They wanted things to be incremental.  They didn’t really want to upset that and I took that, that’s my job.  In some ways, I wish I would have pushed that envelope more.  I understand why they were where they were, they’re coming out of a difficult period of time like every organization was – no different than other organizations coming out of a leadership change of a very long period of time.  So they wanted to be more cautious and I understand that.  But, I probably should have pushed that envelope more because I think we would be farther along.

Eddie:  Well, it’s easier in hindsight to see what we should have done.

Michael:  It always is!

Eddie:  I really appreciate this conversation!  Again, I would encourage everyone to get on CGP’s website.  If you ever have a chance to hear Michael or meet Michael in person, I would encourage you to do that.  He’s a fine gentleman and has a tremendous background.  You ought to hear his history!  I’m somewhat envious of his love for music and the arts, but he’s a great man.  Michael, we really appreciate your leadership and appreciate you taking time today to be with us.

Michael:  Thank you so much for having me!

About Michael Kenyon. As president and CEO of the National Association of Charitable Gift Planners, Michael strives to create an environment where CGP’s 8,000 members can come together to educate, learn, network and advocate for the distinguished profession of charitable gift planning. Working closely with the CGP board, Michael helps develop and champion the organization’s strategic vision, ensuring that CGP’s budget, staff and priorities are aligned with its mission to serve charitable gift planners and bring to life the art and science of charitable gift planning. It’s Michael’s job to navigate change, foster innovation and bring people together to build a healthy and successful organization.

Before joining CGP, Michael served as the executive director of the Percussive Arts Society. For 11 years, he led this international music service organization that serves 7,500+ members, 50 U.S. chapters and 28 international chapters. Among many successful initiatives, he led the organization through development of a new facility for the Rhythm! Discovery Center, a museum and educational space that USA Today named one of the top places in the United States for hands-on music making.

Michael holds B.M. and M.M. degrees from Arizona State University and began his professional life as a musician before transitioning into arts and nonprofit administration. He has worked with St. Martin’s Hospitality Center for the homeless, Celebrate Youth and the New Mexico Jazz Workshop.

Michael currently serves as vice-president for the Charitable IRA Initiative, is a member of the board of directors for the Percussive Arts Society and serves on the steering committee for Music Crossroads, a strategic initiative focused on advancing quality of life in Indianapolis through the performing arts.

With this podcast series, Eddie Thompson, Founder and CEO of Thompson & Associates, brings incredible insight and inspiring stories interviewing leaders from different perspectives of the fundraising community: higher education, healthcare, consultants, academia and more!  Hear these professionals tell stories of lessons they’ve learned during their distinguished careers.  We hope these conversations inspire you to continue to strive for excellence in this noble occupation of fundraising!
Back to Series Page
Share
Share12
Tweet
Email
Print