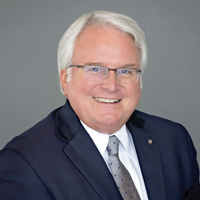 Tom joined Thompson & Associates to serve nonprofits and their generous friends. His responsibilities expanded in 2015 when he was appointed Regional Manager to recruit and mentor new Associates in South Texas.

He has more than 25 years of combined experience in estate and gift planning and working as a planned gift specialist and charitable giving consultant.  Tom has facilitated charitable gifts exceeding $1.2 billion.

Tom served on the national board of the National Association of Charitable Gift Planners and was named to the inaugural class of its Leadership Institute in 2011. He often presents to charitable giving professionals and has delivered continuing legal education in 15 states.

Tom resides in Corpus Christi, Texas. He and his wife, Kathleen, have been married for more than 45 years; they have three adult children and seven grandchildren.