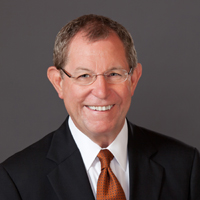 Bob began his professional life as a high school teacher, and credits that experience with shaping his approach to every part of his life since those early days in eastern Washington State. At Thompson & Associates, he has helped hundreds of families discover peace and purpose in the way they will one day leave their assets to family members and charitable organizations; keeping in mind that in his role as their trusted advisor he is there to listen, educate, inform and inspire.

After his teaching experience, Bob spent many years in sales and sales management, primarily in the fields of real estate and investment brokerage. In the early 1990’s he was introduced to the field of planned giving, and knew immediately that working in the nonprofit world was the ideal combination of past experience and life purpose. He has specialized in planned giving throughout his years working with nonprofits, beginning with the St. Helena Hospital Foundation in 1994. In 2001 he assumed the role as Regional Director for the St. Joseph Health System – Northern CA, where he grew the planned giving programs for their five Northern CA Hospital Foundations.

Bob heard Eddie Thompson speak at an AHP conference in October, 2005. The message of putting family’s needs first resonated strongly with his conviction that doing so would result not only in the best outcome for families, but for nonprofits as well. In January of 2006 he became the first Thompson associate in the western part of the U.S.

Bob and his wife, Elaine, have lived in the Napa Valley for the past 25 years. They are blessed to have their two daughters and their families living in Napa as well, which means “grand parenting” on a daily basis for their two granddaughters, Morgan 9, and Reagan 6.