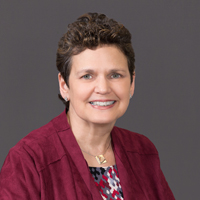 For almost 30 years, Lydia has held leadership positions at prominent education, arts and health care institutions. Prior to her tenure in advancement, Lydia practiced law in Boston, Massachusetts.

Lydia and her family had a unique introduction to their adopted city of Houston in September 2005, a week after Hurricane Katrina had decimated New Orleans. Arriving with 250,000 evacuees, Houstonians opened their homes, hearts and wallets to support those in need, taking in more evacuees than anywhere else in the country.  These strong traditions of philanthropy and civic engagement are among the reasons they have stayed, despite events such as Hurricanes Ike and Harvey.

Lydia is active with the local planned giving council and has had leadership roles with her church. In her spare time, you may find her playing in one of several ukulele groups, taking a class at the YMCA or spending time with her husband of 24 years.  They have one son, who is attending college in North Texas.